- June 20, 2017
An all-party meet convened by the Gorkha Janmukti Morcha (GJM) will chalk out their “next course of action” as the indefinite shutdown continued to cripple normal life in Darjeeling the sixth consecutive day.
The meeting, which is likely to be attended by all the political parties of the hills, is scheduled to be held at Gymkhana Club today.
“We will discuss with all the hill parties and chalk out our next course of action,” a GJM leader said. The hill parties have agreed that the demand for a separate Gorkhaland state was a “priority”.
Security forces were patrolling the streets and Internet services remained suspended for the third day today.
Except medicine shops, all other shops remained closed.
Yesterday, effigies of West Bengal Chief Minister Mamata Banerjee were burnt as thousands of protesters marched on the streets of Darjeeling demanding a separate state.
(PTI inputs) 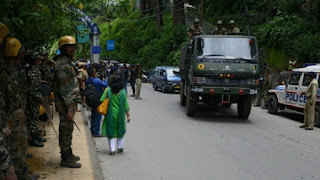