- June 15, 2017
Amid violent protests in the hills, the West Bengal government on Thursday transferred Pradip Kumar Singha, Deputy Superintendent of Police (DSP), Darjeeling and replaced him with Avijit Mitra.
According to a notification issued by the state police directorate, Mitra, who was the Joint Assistant Director, IB, in West Bengal, will replace Singha.
Singha will now be the DSP of DEB, Nadia, it said.
Incidentally, the state government removed Darjeeling superintendent of police Amit Javalgi after the incident on 8 June, when Gorkha Janamukti Morcha (GJM) supporters clashed with the police while trying to break barricades near the Raj Bhawan, where Chief Minister Mamata Banerjee was holding a cabinet meeting.
GJM supporters had damaged police vehicles and set some of them ablaze.
Akhilesh Chaturvedi, Kolkata Police Deputy Commissioner, was made the new superintendent of police of Darjeeling.
The state government had earlier replaced Gorkhaland Territorial Administration (GTA) principal secretary Ravi Inder Singh and brought in Barun Ray and appointed C Murugan as the new secretary of GTA in place of Donbosco Lepcha.
GJM has revived its separate Gorkhaland demand and its indefinite bandh in the offices of Gorkhaland Territorial Administration and state government in Darjeeling Hills entered its third day on Thursday.
The hill outfit has called an indefinite shutdown after police on Thursday raided premises connected to its chief Bimal Gurung and some other leaders.
First Post 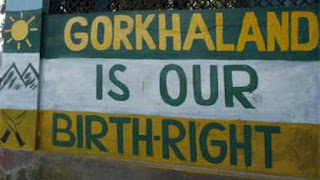