- June 11, 2017
A day after removal of the Darjeeling superintendent of police, Inspectors in-charge of Kalimpong and Kurseong were shifted from their posts today in connection with the clashes between activists of Gorkha Janamukti Morcha (GJM) and the police on Thursday.
Bhanu Rai, Inspector in-charge of Kalimpong police station, and Dipankar Som of Kurseong police station were removed from their posts with immediate effect, an order issued by the Inspector General, Law and Order, said.
Inspector Tirtha Sarathi Nath of Dinhata police station will be the new in-charge in Kalimpong, while Parijat Sarkar of Siliguri will be the new IC of Kurseong police station, it said.
Rai was transferred to Murshidabad and Som was made inspector of Siliguri, a step taken at the behest of Chief Minister Mamata Banerjee, a senior official in the Law and Order Department said.
Darjeeling SP Amit Javalgi was yesterday removed from the post and replaced by Kolkata Police deputy commissioner (central) Akhilesh Chaturvedi.
Javalgi was sent to compulsory waiting as per the instruction from the secretariat. The government is likely to remove ADG & IGP Intelligence Branch Gangeswar Singh from the post, a department source in the department said.
On Thursday, the hill station had turned into a virtual battlefield after GJM supporters clashed with the police when they were stopped from marching to the Raj Bhawan where the state cabinet meeting was underway.
The GJM Yuva Morcha had called a 12-hour bandh yesterday protesting against alleged imposition of Bengali language in the schools in the hills as well as for a separate Gorkhaland. (PTI)
Pic (Aishik Chanda | EPS) 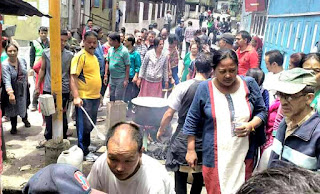 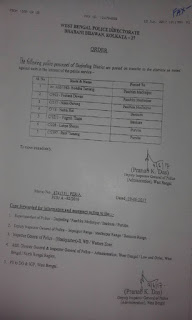 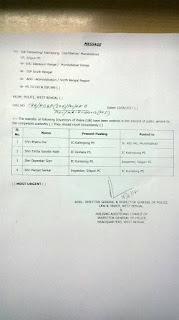