- June 11, 2017
Section 144 prohibiting assembly of more than 4 people has been imposed. Nine companies of the Central Reserve Police Force have been deployed to Darjeeling.
Supporters of the Gorkha Janmukti Morcha (GJM) set fire to a government office in a village near Darjeeling early on Monday during an indefinite strike called by the regional party for a separate Gorkhaland.
The panchayat officer’s chamber was completely gutted in Bijanbari village, about 35 km from the city of Darjeeling. There had been no arrests at the time of filing of this report.
The GJM called the strike from Monday in banks and all offices of the state government, the Centre and the Gorkhaland Territorial Administration for a separate state and against the alleged imposition of Bengali language in schools.
District magistrate Joyoshi Dasgupta said that section 144 of the Code of Criminal Procedure, which bars assembly of more than four persons, was in effect around government offices in Darjeeling.
The ruling party in the state, the Trinamool Congress, issued an order on Sunday mandating that offices in Darjeeling and Kalimpong stay open. Any time missed by government employees will be treated as a break in service that results in lost salary.
The situation in the hills is tense. Paramilitary forces and police officers were patrolling the streets.
On Thursday, the police and the chief minister, Mamata Banerjee, sought help from the armed forces.
GJM president Bimal Gurung has asked tourists to leave area. The Darjeeling toy train, a major tourist attraction that is on the World Heritage List, has stopped operating.
By Pramod Giri, Hindustan Times, Darjeeling 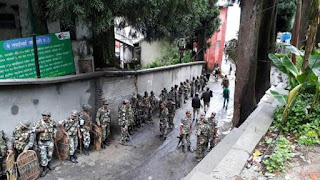