- June 22, 2017
Ambulance services were hit and TV cable connections snapped in some areas as the GJM- sponsored indefinite shutdown in Darjeeling hills entered the eight day on Thursday.
No untoward incident was reported from anywhere in Darjeeling which had witnessed widespread clashes between GJM activists and security forces on Saturday.
Ambulance operators were refusing to carry patients due to fear of harassment. Since morning, local cable TV connections were snapped in a section of the hills.
Internet services also remained suspended for the fifth day to stop the spread of rumours that incite violence.
Police patrolling was intensified in the hills since morning.
Although the West Bengal government has called an all-party meeting in Siliguri on Thursday, all the Hills parties have decided to boycott it.
As normal life continued to be crippled, the GJM offered a 12-hour “window” on June 23 to schools to evacuate students safely to Siliguri and Rongpo.
The GJM is leading an agitation for a separate Gorkhaland state to be carved out of West Bengal. 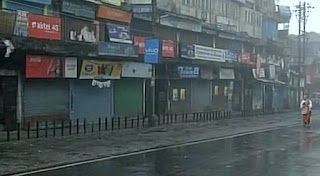