- June 23, 2017
The GJM with combined support of hill parties, spearheading the agitation for a separate Gorkhaland, adopted a confrontationist stand today with its chief Bimal Gurung threatening to intensify the stir and demanding a CBI inquiry into the alleged police firing in the hills on June 17.
Gurung, who resigned as the Gorkhaland Territorial Administration (GTA) chief executive along with other elected members of the body during the day, said, “The agitation for Gorkhaland will continue. We have resigned from the GTA. Our one point demand is Gorkhaland.”
The Gorkha Janmukti Morcha (GJM) leader, who was not seen in public for the past several days, appeared before the media at Patlebas in Darjeeling, a party stronghold.
“I am not Kishenji (Maoist leader) who can be eliminated in a police encounter. I have not taken up arms against the country. I am fighting for the identity of the Gorkhas and in a democracy I have every right to do that,” he said.
“Our fight will continue and I will fight till the end,” he said.
Alleging that the police had opened fire in the hills on June 17 in which three GJM activists were killed, Gurung said, “We (the GJM) have the video footage of the incident. I demand a CBI inquiry.”
It was the state government which has violated human rights and slapped false cases against the GJM, he claimed.
Asked about the Centre’s reponse to the GJM’s demand, he said, “Talks are on with the central government and we hope something positive will come up soon.”
He said the GTA was a “closed chapter” and that the next all-party meeting will be held on June 29 to decide the next course of action. 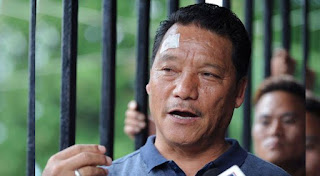