- June 01, 2017
The district consumer court here has ordered an eye surgeon to pay to Rs 1.5 lakh as compensation to an elderly woman who lost vision in one eye after using an eye drop prescribed by the doctor.
The move follows an appeal made by Bijali Sarkar, 62, a resident of Kamakhyaguri, on January 19, 2016, who demanded compensation for wrong treatment because of which the woman lost vision in the right eye.
A bench of three judges at the District Consumer Dispute Redressal Forum asked Angshuman Sen Sharma, the eye surgeon at Kamakhyaguri, to pay the amount within 45 days from today.
Kamalesh Dutta, lawyer of Sarkar, said: "Sharma had prescribed a steroid drop to Sarkar who had gone for an eye check-up at his chamber on January 20, 2015. Later, she developed an infection in the right eye and was operated on in Nepal at Mechi Netralaya where an artificial eye (glass eye) was replaced with the infected eye, to prevent spreading of the infection.
Telegraph 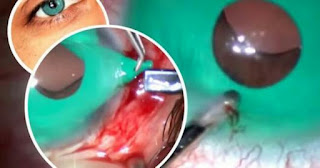