- June 01, 2017
Mamata Banerjee warned Trinamul leaders against "cuts, commissions, lobbying" that hold up development projects and business activities, declaring "I have had enough".
"Cuts, commissions, lobbying... leaders thrusting their unfair, unjust will upon workers who bleed and sweat at the grassroots.... I have had enough of this. No more. Consider this a warning, my warning. These things will end now," she said during an administrative meeting in Hooghly's Tarakeswar.
Several Trinamul leaders present at the meeting - including Saptagram MLA and district party president Tapan Dasgupta, Chinsurah MLA Asit Mazumder, Haripal legislator Becharam Manna, Singur MLA Rabindranath Bhattacharjee and Serampore MP Kalyan Banerjee - came in the line of Mamata's fire as she picked up a host of issues ranging from extortion to factionalism.
A senior party leader cited the instance of a new university she announced for Hooghly today - besides a medical college for Tarakeswar and a new commissionerate in Chandernagore - that several elected representatives tried to stake claim on.
"So many of them tried to ensure that the university comes up in their constituency. Everyone understands that this was not for any noble cause," the leader said. "This infuriated her.... She made it clear that she alone will decide the location of the university." he added.
The leader also pointed out that the chief minister was infuriated when Mazumder demanded Rs 14 crore for a stadium in his constituency when Rs 5 crore had already been allotted for it.
"Are you kidding me? You are trying to teach me that you need that much money for a stadium? You people are making me furious.... Either make do with what is being given or even that will be taken away," Mamata said.
"Subtract your commissions and cuts, the money allotted will be enough," she added.
At the meeting, Mamata also instructed the Hooghly administration to take a tough approach in dealing with law and order situations.
When a representative of a business outfit based in Polba appealed to Mamata to help in dealing with a group seeking extortion money for several years, the chief minister asked him to lodge a complaint.
When he said that repeated complaints had fallen on deaf ears, Mamata asked him to send a letter to her Kalighat office.
"Why will you shell out extortion money? Why? You will not. I am telling you," she said.
"I have been hearing many things myself.... I want you (the district administration) to act sternly against such things, this is my order. No matter who is behind it, put an end to such things. Are you getting what I am saying? I think I have made myself abundantly clear," she added.
On Tuesday, during a similar meeting in North 24-Parganas, the chief minister had issued instructions for the smooth revival of Titagarh Wagons Limited, which has been stalled by people allegedly backed by Trinamul.
Telegraph 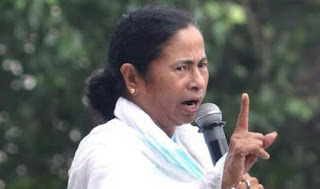