- June 09, 2017
Chief Minister Mamata Banerjee today interacted with the media in Darjeeling, in the aftermath of the senselessly violent protests in Darjeeling yesterday.
The police, the Army and the administration have together worked hard and brought back normalcy in the Hills.
Mamata Banerjee told the press that the bandh has not had much effect in the Government offices. Attendance in the SDO and BDO offices in Kalimpong, Kurseong, Darjeeling and Mirik were 98-99 per cent.
She said, “Some shops are closed because of fears of damages being caused by miscreants”; however, “the situation is under control and it’s peaceful now” and wished “the people of the Hills remain happy and peaceful”.
Many tourists are still enjoying here the sights of Darjeeling
She loathed the incidents that happened yesterday: “What happened in Darjeeling yesterday is so abhorrent that it cannot be described in words. One can only stage such protests during the prime tourist season if one is bereft of good ideas”. Yesterday, for one-and-a-half to two hours, there was senseless destruction; the protesters had illegally accumulated arms and stones.
This year more than a lakh tourists have come to Darjeeling – both from other States and other countries. The Chief Minister said, “The protesters don’t realise that if anything happens to a foreign tourist, it is India that would get a bad name”.
For this reason, people are very angry with such protests, she said.
Tourism is the mainstay here. “Without tourism, there would be no income for the people, and without vehicles (many of which were burnt down), no trade or tourism”.
“Those who are doing this cannot do anything themselves, so create trouble whenever elections come every five years”. She said that the real reason for the protests was “the loss suffered by GJM in the recent municipal polls”, and that “Bengali being made a compulsory subject in schools was a complete non-issue”.
Mamata Banerjee said that all arrangement have been made to help stranded tourists. The State Government has set up a helpline for tourists as well as for others. It has arranged, at its own cost, special AC buses and Tata Sumos for transporting tourists back. The Government has also requested the Railways to provide additional trains and additional coaches. Airlines have also been requested to provide additional flights since many tourists are stranded in Bagdogra Airport.
The protesters didn’t even spare women, the Chief Minister said. Sixty to 70 police personnel were beaten up; tourists and media personnel were harassed too.
However, Mamata Banerjee said, “the Hills are peaceful now”. “We have shown a lot of restraint since we want peace to reign in the Hills”.
She further said, “We don’t want to encourage any separatist movements; those who do, do not love the State. For us, the whole State is like a family”.
The people of Bengal attach a lot of sentiment is the Hills; the people of the Hills too work all over the State. So everyone should live together happily.
“Hence, I appeal to everyone to maintain peace”
She made another important point, “Let politics have its own place, let people not link personal issues with politics”
Mamata Banerjee warned that “both the Left Front Government and the Centre had compromised, but there is a lakshman rekha to compromising too”. “We will take suitable measures to bring the law and order situation under control; the law will take its own course”.
She also stressed that Trinamool supporters were not involved in any untoward activity.
About the CPI(M)’s criticism of the Government’s actions, she said, “The CPI(M) should look at themselves first before criticising us – how they neglected the Hills during their rule”
“The Government’s job is to protect the common people of the Hills, and not to encourage protesters. The police and the Army are now in control of the situation”.
She also thanked the media for portraying the reality.
AITC 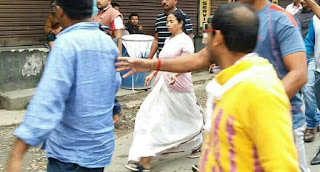