- June 18, 2017
Amid spiralling tensions in Darjeeling over the Gorkha Janmukti Morcha’s demand for a separate Gorkhaland, West Bengal Chief Minister Mamata Banerjee on Monday arrived at Kolkata airport to leave for the Netherlands where she will be addressing the Public Service Day of United Nations on June 22 at Hague. She is the first Chief Minister of India to address on the occasion.
Ahead of the visit, she sent out a stern warning to protesters in the hills. “Violent protest won’t be tolerated. My ministers are monitoring the situation,” she said. The CM has called an all-party meeting in Siliguri on June 22 to discuss the Darjeeling unrest, which she will skip given her pre-scheduled engagement at the UN. Senior officials and Trinamool Congress leaders will attend the meeting.
Earlier, Morcha MLA from Darjeeling Amar Singh Rai in a press conference said, “We are not happy, we are disappointed with the Centre. Three of our people have died. The Centre should be positive and initiate talks. We do not want to be pawns in state-Centre politics. We are an ally of NDA and BJP, and gave two MPs from this region.”
“We are not ready for talks with Mamata Banerjee. First of all, security forces should immediately be withdrawn and normalcy should return. Then, the Centre should take an initiative for tripartite talks. We are ready for talks on Gorkhaland issue,” Rai added.
The indefinite strike called by Gorkha Janmukti Morcha (GJM) over demands of a separate Gorkhaland entered its eighth day on Monday. 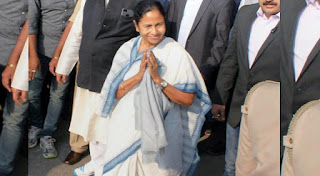