- June 07, 2017
The CID has identified over 500 fake doctors practising in government hospitals and private clinics in West Bengal. A highly-placed official of the agency said that around seven to eight fake institutes were involved in the racket.
“Fake doctors are present in sizable numbers in government and private hospitals all over the state. We have information that around seven to eight fake institutes in the state are involved in the business apart from other such establishments in neighbouring states,” the official said.
State Medical Council president Nirmal Maji said that they had a list which would be handed over to the police.”
The CID already arrested six fake doctors from various parts of the state including Ajay Tiwary and Naren Pandey who were attached to two renowned private hospitals in the metropolis.
It has also seized a large number of documents comprising fake marksheets, fake records of students of MBBS course after raiding the office of Alternative Medical Council of Calcutta at Barasat in North 24-Parganas district.
During the raid they also seized the soft copy of fake MBBS record of another such doctor Kushinath Halder which was detected in the hard disc of the office.
CID sleuths said that fake certificates and registration numbers were given by those institutes at a hefty price. Maji said that the fake doctors had links with senior officials of the health department besides political laders and civil and police officers.
“The fake doctors have been practising since the days of the Left Front government. Thier contacts had helped them practice as doctors,” he said.
On the insistence of CID, the Council had issued a directive to doctors to register themselves afresh, and renew and update their credentials with them.
The medical council also directed hospitals to provide it with names of registered doctors which would help the council screen the list of doctors practising in the state.
The Medical Council had lodged complaints with the police based on which the arrests were made. The Council also appealed to the people to inform it if they suspected anybody to be a fake doctor.
Police sources said that old registration numbers, used by doctors who are not in the profession now or had expired, were being provided to such persons.
Maji said that the state Medical Council would accept complaints from the people.. “If a complaint is found genuine, we will get an FIR lodged,” he said adding that the state government was trying to formulate a mechanism to stop the practice. 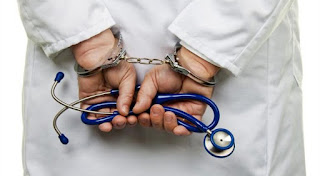