- June 03, 2017
West Bengal CID on Saturday arrested another person allegedly posing as a doctor of a renowned city hospital, taking the total number of arrests to six in the case.
The CID sleuths arrested Ajay Tiwari, attached to Kothari Medical Centre , a top CID officer told PTI.
“We had a tip off about this person and we were tracking his activities for the last two days. We arrested him tonight from his chamber in the Kidderpore area,” the IPS officer said.
Tiwari has been associated with Kothari Medical Centre for over 20 years as a Gastroenterologist, he said. “Tiwari in reality is a BCom graduate. We have all the documents against him. It seems that Tiwari is part of the racket that is active in this business,” the officer said.
The doctor, who was charging patients Rs 300 as consultation fees, would be produced at a court tomorrow, he said.
Six IPC sections including punishment for cheating by personation, cheating, forgery of valuable security, forgery for the purpose of cheating, using as genuine a forged document and punishment of criminal conspiracy have been slapped against Tiwari and those arrested as fake doctors. 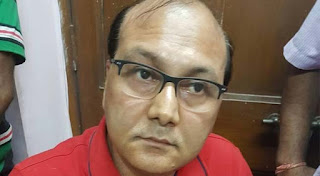 Unknown said…
Very shameful matter !
Not only in West Bengal , but throughout the country , the local police station should verify each and every doctor's certificate/genuinity & put a token number .
No one should be spared .
The GOI should implement a rule so that no one fools a patient .
15 December 2021 at 10:22

Unknown said…
This is something we can't take,playing with someone's life is a biggest crime how can these people sleep at night shame on them