- June 13, 2017
Gorkha Janamukti Morcha (GJM) chief Bimal Gurung today said he is in constant touch with the Centre and is hopeful that its ally the BJP will consider its demand for a separate Gorkhaland "compassionately".
"I am constantly in touch with the central government and various ministers. I am very hopeful that they will understand our pain and struggle and will consider our demand for a separate state of Gorkhaland.
"The government at the Centre is our ally and they will surely consider our demand compassionately," Gurung said.
The BJP, he said, has always been in favour of small states.
The GJM chief slammed West Bengal Chief Minister Mamata Banerjee for calling in the Army to control the situation in the hills and advised her to stay out as "the people of Darjeeling are well-equipped to take care of themselves".
"My advice to Mamata Banerjee is please stay away from the hills. We don't need your charity. The people of the hills will not accept the TMC's hegemony," he said.
Hitting out at the chief minister for calling in the Army to control the situation in the hills, Gurung said, "Mamata Banerjee is just pursuing opportunist politics. In December last year, she had accused the Army of trying to attempt a military coup. She can do anything for the sake of cheap politics.
"We are not like her. We respect the Indian Army. Every year hundreds of youth from the hills join the Indian Army,"
The Army was deployed in restive Darjeeling town on June 8 after the GJM supporters clashed with the police, damaged police vehicles and set some of them ablaze as Banerjee held a cabinet meeting at the Raj Bhawan there.
The GJM had also tried to march to the venue of the meeting.
Gurung accused police of letting loose "a reign of terror" on the people of the hills.
"The police are going to every household and threatening the people by saying don't listen to the GJM or we will give false cases against you. Is this the way you treat the people of the hills?" he said.
PTI ( In pic: Woman injured during lathi charge by police) 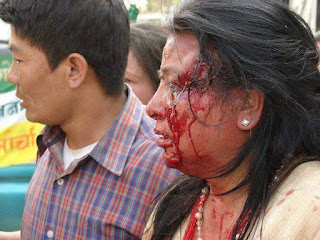