- June 07, 2017
The Union ministry of surface transport and highways has chalked out a plan to build an alternative road to Sikkim through Kalimpong district under the 'Bharatmala' project.
The 124km stretch will start from Teesta Bazaar (on Sikkim border) in Kalimpong and will converge on NH31 at Chalsa, 30km from Japaiguri.
At present, NH10 that originates at Sevoke, 20km from Siliguri, is the only highway that connects Sikkim with the rest of the country.
The road, sources said, has been planned to intensify internal security of the country as Sikkim is located at on Indo-China border and certain stretches along NH10 are landslide prone areas that disrupts traffic movement during a landslide.
R.K. Chaudhary, the project director of NHAI posted in Siliguri, said a detailed project report was being prepared.
NHAI sources said the road from Teesta Bazaar would head towards Pedong and pass through Todey and Tangta, two villages in Kalimpong and close to the Dooars. From there, the road will touch Jhalong and Kumai More.
"Earlier, it was planned that the road will meet NH31 at Khunia More located in the middle of Gorumara National Park and Jaldapara Wildlife Sanctuary. But keeping in mind the two reserve forests and wildlife it has been diverted through Metelli and will converge on NH31 at Chalsa," an NHAI official said.
Sources said, about eight years ago, a similar plan was prepared but was dropped as the Union ministry of environment and forests did not approve the project as several trees would have to be felled to build the road that is why the route has been altered this time.
Xavier Rai, a resident of Paton village located near Todey, said: "The residents of Todey, Tangta and Jhalong villages, will be largely benefited if the road is built. We travel 150km to reach Kalimpong. If the new road is built, we will have to travel only 25km to 30km to reach Kalimpong.
Telegraph 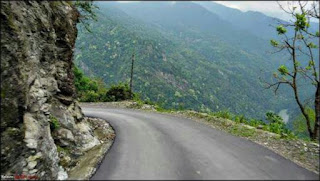