- June 01, 2017
The family of a Border Security Force (BSF) subedar posted in West Bengal has demanded a probe into his death, alleging that the body, when they received it, had eight bullet holes. While the paramilitary force's officials have stated that it was a suicide, an internal investigation has been ordered.
Subedar Bijendra Singh (52), posted at the 98 Battalion camp Toofanganj, Cooch Behar, died on May 28. His unit officers called his family and informed them that he had shot himself, and that the post mortem confirmed this.
The body was then sent home to Tundla in Firozabad on Tuesday, where Singh's family lives. Singh's colleagues from 25 Battalion in Delhi, who brought the body, gave it a guard of honour. A resident of Jalopura village in Tundla, Singh had joined the BSF in 1985.
However, Singh's family, including his wife and three sons, claimed that the body bore eight bullet holes, and demanded an investigation into the death. They also refused to conduct his last rites, seeking a second post mortem.
Singh's son Umakant said, "My mother and I had spoken to my father on May 28 around 6am. Later, we were informed by a senior officer from his battalion that he had committed suicide in his room. No specific reasons were given. There are eight bullet wounds in the body."
District magistrate Neha Sharma and senior superintendent of police (SSP) Ajay Kumar who had reached the village tried to pacify the family, which insisted on an investigation into the death. After additional district magistrate Uday Singh spoke to senior BSF officials in Cooch Behar and was told that an internal investigation had been initiated, the family agreed to cremate the body.
ADM Uday Singh said, "I spoke to the BSF commandant in Cooch Behar through BSF personnel who had brought Singh's body, and was told that it was a case of suicide. However, to rule out any foul play BSF authorities are also conducting an internal investigation. The subedar's last rites were conducted after the family was assured that their doubts would be addressed." 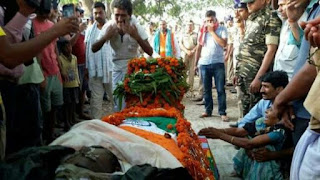 BSF officials, meanwhile, denied allegations of foul play. Talking to TOI, Subhendu Bharadwaj, PRO, BSF, New Delhi, said, "Subedar Singh committed suicide inside his room. A suicide note found at the spot indicated he had some personal problems. There were only two bullet wounds on his body. He shot himself with an automatic gun, which fired three bullets. The third bullet was found in the room. There is no evidence to indicate foul play. However, Toofanganj police are investigating the death, as is regular practice." (TOI - File Pic)