Bison attacks villagers, destroys five houses and kills a cow and a pig at a tea garden area in Dooars

- June 03, 2017
A bison, that strayed in a village, attacked two persons and destroyed five houses in Dooars, a forest official said.
The bison came out of the nearby Reti forest and moved around the upper-line of the Kathalguri tea garden area for about three hours.
There he injured two persons, destroyed five houses and killed a cow and a pig, they said.
Soon forest officials reached the spot and controlled the rampaging bison by using tranquilising shots. 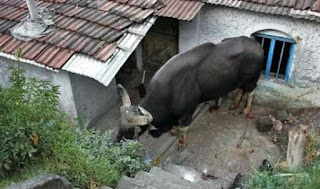