- June 01, 2017
The state had no plans to make Bengali a compulsory language in Hills schools or replace Nepali with it, said the Darjeeling district magistrate on Wednesday.
The announcement came a day after GJM president Bimal Gurung told school and college heads to shut their institutes on June 1 and 2 to protest against the state's alleged decision to impose Bengali in the Hills.
"Rumours are doing the rounds that Bengali language will be imposed on all schools and that it will replace Nepali. On behalf of the state, I would like to clarify that there is no such intention to impose any kind of language on any people in the Hills," said Darjeeling DM Joyoshi Dasgupta. Pointing out false rumours were unnecessary creating misunderstanding as the government had not issued any notification, Dasgupta said, "The state on Tuesday clarified that no language would be imposed or Nepali replaced. There seems to be a misunderstanding. There is no notification or circular." The DM also appealed to the GJM to tale a "peaceful protest" route and to keep educational institutions and children out of politics.
Without naming names, Darjeeling SP Amit Javalgi said a party was spreading false information to harm the interest of people and the prospect of a language, using teachers and students as shields. (TOI) 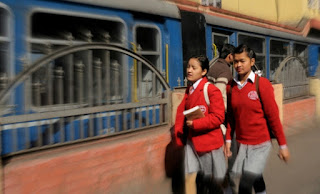