- June 08, 2017
Amid violent protest and arson in the hills of Darjeeling by the Gorkha Janmukti Morcha (GJM) where West Bengal Chief Minister Mamata Banerjee was chairing a state cabinet meeting, the state government has sought Army help to control the situation.
While the GJM, which set on fire police vehicles, called a shutdown on Friday, the state government has sought help from Indian Army to restore peace in violence hit Darjeeling.
Chief Secretary of the state has requested the Centre to deploy army in Darjeeling at the earliest.
A senior official of Indian Army's Eastern Command told "We have not received any direction regarding army deployment from our headquarters in Delhi so far."
"Troops would be deployed in Darjeeling from our camp in Sukna if we get order from the Centre," he added.
Almost all ministers of West Bengal, including CM Mamata Banerjee, and over 10,000 tourists have been stranded in hills due to the protest.
Local administration is requesting the tourists to stay inside their hotels and not to move outside.
GJM leader Bimal Gurung has called for a 12-hour-long general strike in Darjeeling hills tomorrow (Friday). Gorkhas, who are ethnic Nepalese, led by parties like GJM have been demanding a separate state of Darjeeling for several decades.
A police official told "At least 50 policemen, including 3 officers and few female cops, were injured in the sudden attack."
"They threw bricks, stones and glass bottles aiming at cops. Police restored to lathicharge and lobbed tear gas shells. Over 12 vehicles, including a state bus and few police jeeps, a police kiosk and a local police outpost at Mall were set on fire by protesters. We have detained few protesters."
CM Mamata Banerjee condemned of the incident and has directed local administration to take all adequate steps. She said tourists will be evacuated safely. 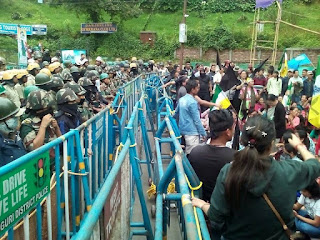