- June 07, 2017
Security agencies went into a tizzy after nearly 655 bags of suspected ammonium nitrate, a chemical that can be used as an explosive, were seized from two trucks in the Md Bazaar area of Birbhum on Tuesday.
The quantity of ammonium nitrate seized is nearly 32,750kg. Barely 2% of this amount may be sufficient to bring down a high rise should it fall into the hands of an explosives expert, a senior police official said.
The first 10-wheeler truck was apprehended at Rampur village on National Highway 60 early in the morning with 350 bags of chemicals. A person, suspected to be a labourer engaged to load and unload the bags, was arrested but the driver and helper could not be traced.
The truck was on its way to Salbadra, a hamlet close to stone quarries. Though the truck (WB-39 A5395) is registered with the regional transport office, Durgapur, police suspect that the explosives are from Maharashtra.
The second 10-wheeler vehicle was located in the Panchami area where nearly 305 bags of chemicals were being unloaded at a godown at Talbandh village.
The godown allegedly belongs to one Bipad Mondal, who supplies explosives to stone quarries in the area. Though Mondal is absconding, two persons have been arrested from the godown.
Police say that the truck had brought in explosives from Hyderabad.
“The owners of the vehicles have been traced and teams have rushed to several places to carry out a probe. We hope to arrest all of those involved in this illegal smuggling of explosives. We are also trying to confirm whether the material is actually ammonium nitrate. Though this chemical is used in stone quarries here, we are not ruling out other possibilities. The quantity of material seized is a matter of concern,” said N Sudheer Kumar, SP, Birbhum.
Police do not rule out the possibility of some of the explosive being smuggled into Jharkhand with which Birbhum shares a 38km boundary. There is Left Wing Extremist-presence in all the three Jharkhand districts adjoining Birbhum. Birbhum is also next to the Burdwan district where a Jamaatul Mujahideen Bangladesh (JMB) module was involved in preparing explosives using Ammonium Nitrate in 2014.
Truckloads of stone chips from quarries in Birbhum are also sent to Bangladesh where terror outfits are known to use Ammonium Nitrate. 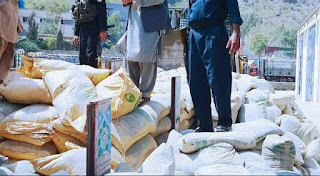