- June 04, 2017
At least 22 people were charred to death and several others were injured when a passenger bus caught fire after colliding with a truck on National Highway 24 in Bareilly UP at around 1 am on Monday night.
The injured were rushed to nearby hospitals. Most of them are said to be in a critical state.
The bus belongs to Uttar Pradesh State Transport Corporation (UPSRTC) and was headed from New Delhi to Gonda depot in central Uttar Pradesh.
The accident occurred on an under-construction stretch of the highway between Bareilly and Shahjahanpur. The bus driver was reportedly speeding past a junction leading to the collision.
According to witnesses, the bus caught fire moments after colliding with truck giving no time for passengers to evacuate. Most passengers were asleep when the accident occurred, while some managed to escape through the windows.
"We have recovered charred remains of around 10 passengers and our teams are trying to locate others," said the SSP. " At least 20 other passengers who managed to escape have been admitted in hospital," senior superintendent of Police (SSP) of Bareilly Joginder Kumar said.
Officials have not yet confirmed the number of passengers who were on the bus at the time of the accident. 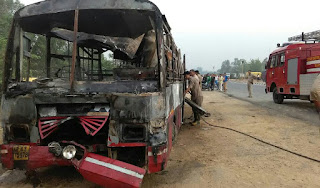