- June 28, 2017
Barely few Indian men have made to the final stages of the World bodybuilding competitions and very few of them went on to win it. But 21 year old Bhumika Sharma from Dehradun made the whole country pride by winning the miss world bodybuilding title and will now be competing in the Miss Universe competition after a few months.
By winning this competition, Bhumika defied many stereotypes in the country which denies our women to do something which involves so much physical strength. Interestingly, her mother Hansa Manral Sharma is a weight lifting coach and she was the one who prompted her daughter to go all the way.
The championship comprised 50 contestants from around the world and Sharma was one of the 27 Indians to rock the tournament. She gained the most number of points in body posing, individual posing and fall category.
Bhumika Sharma’s achievement will inspire many young girls across the country to do something similar and win big on the global stage for the country. To help your country win accolades and make all your people proud is probably the best feeling in the world, something which is currently being experienced by Bhumika.
We barely let our women work in offices because we feel they’re less superior to men. But that sick mentality from the 19th century is not going to help our developing country progress by any stretch of imagination. We need women in every sector to contribute to our country’s growth.
Various female icons in our country like Chanda Kochar, Arundhati Bhattacharya, Mithali Raj, Saina Nehwal, Sania Mirza, PV Sindhu, Priyanka Chopra etc are making a big name for themselves not just in our country but across the globe. Bhumika Sharma will sooner rather than later join this elite list of women achievers and will continue to inspire all our women to do something big. 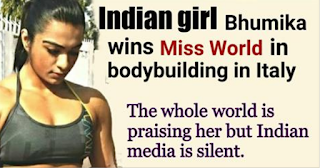