West Bengal to not pass GST bill for now

- May 21, 2017
The Bengal government is one of the few states which are not ratifying the GST bills in the Assembly. The state also skipped the meeting called by the Union finance minister at Srinagar.
The meeting called by Jailtey for consensus on GST was not attended by Odisha, Tripura and West Bengal finance ministers. However, Odisha Assembly ratified it in a special session of assembly and Tripura is expected to follow.
Amit Mitra, the finance minister of West Bengal, was the chairman of the committee of state finance ministers in 2016 and played a crucial role in bringing unanimity among the states over the GST. However, he walked out of the meeting in November last year, saying the central government was "hasty to implement GST without proper studies about possible impact”.
In December, Mitra also wrote a letter to Jaitely asking him to review the Union government’s decision to make GST operational before September. He argued that state governments must be brought into the loop while deciding about the GST rates. Mitra had also warned about the adverse effects the GST would have on people after demonetisation of Rs 1000 and 500 notes were carried out in November 2016. “I feel that the country is not ready to face the GST burden as yet,” Mitra said, while talking to the press couple of days ago.
Union finance ministry fixed the rates even though no unanimity was reached at the meeting held in Srinagar. Mamata Banerjee government decided not to pass the bill in the Assembly unless its grievances are addressed. “The state’s issues did not get addressed by the finance ministry. Also, there are issues like cross state rates which have also been overlooked,” said a cabinet minister from West Bengal.
Meanwhile, industries, officially or unofficially, have welcomed the central government’s move to implement GST as quickly as possible. “We cannot sit idle anymore. We wanted that to be implemented as early as possible. If we don’t do that now, we will miss the bus,” said an industrialist in Kolkata, on the condition of anonymity.
The health sector heaped praises on Finance Minister Jaitley for exempting health and education sectors from GST ambit. “We believe that by doing so the government has accorded health care and education the due importance and impetus that they need to become game changer for transforming India. However, health care has always been in the zero lists. So the positive impact of this will not be felt,” said Suneeta Reddy, managing director, Apollo Hospital groups.
Arundhati Bhattacharya, SBI chairman, thinks that the implementation of GST will not be easy in banking sector. “It will be a challenge for us because of cross-state issues. However, over all the impact will be positive after implementation,” she said.
The Week 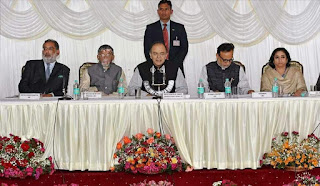