- May 21, 2017
Mamata Banerjee has stepped on the pedal to challenge the Gorkha Janmukti Morcha's writ in the hills by nominating a leader from the region for the elections to the Rajya Sabha.
The move to nominate Shanta Chhetri, the Trinamul working president in the hills, comes close on the heels of the party defeating the Morcha in the Mirik municipality and getting a toehold in other civic bodies in the region. Apart from Chhetri, Mamata announced Derek O'Brien, Sukhendu Sekhar Roy, Dola Sen and Manas Bhuniya as other candidates from Bengal for the June 8 polls.
O'Brien, Roy and Sen are members of the Rajya Sabha, while Chhetri and Bhunia are first-time nominees for the upper House.
Political observers pointed out that as Trinamul had the necessary numbers - it won 211 seats in the Assembly polls last year and each candidate would require at least 42 votes to sail through - the election of all the five nominees to the Rajya Sabha was a mere formality.
Nominating a candidate from the hills is a clear indication that Mamata is going all out to make her party stronger in the region.
"The announcement hints that our top leadership believes we can take on the Morcha on its turf," said a senior Trinamul leader.
N.B. Khawash, the working president of Trinamul (hills), said: "It is a proud moment for the hill people and the Gorkha community. Shanta Chhetri's nomination is concrete proof that Mamata Banerjee supports the Darjeeling hills and the Gorkha community."
Khawash's stress on Mamata's love for the hills and the Gorkha community assumes importance as the recent civic elections were centred on the "local versus outsider" sentiment in the region.
Asked about her nomination, Chhetri said: "Our leader wants peace, development and democracy in the hills. There has been no development here as the current MP from Darjeeling, S.S. Ahluwalia, has done nothing much. On behalf of the hill people, I would like to thank Mamata Banerjee for showering love on the region."
Chhetri, a three-time GNLF legislator, switched over to Trinamul a few years ago. She had contested from Kurseong on a Trinamul ticket in the last Assembly polls and lost to the Morcha. She was a Trinamul candidate in a ward in Kurseong in the civic polls last week and once again tasted defeat.
The Morcha welcomed Mamata's decision, unwilling to stir any emotion that might affect the party.
"She (Chhetri) is a sister from the hills and we welcome Mamata Banerjee's decision. We are hopeful she will support the Gorkhaland bill when it is placed in Parliament. The hills will be looking forward for her support," said Binay Tamang, the assistant secretary of the Morcha.
Trinamul leaders said Bhuniya's nomination to the Rajya Sabha had come as a relief for the MLA, who had switched over to Trinamul from the Congress in September last year. The six-time legislator from Sabang was hardly visible in political circles after his switchover.
"I am grateful. This is a recognition for a soldier. This is the biggest honour in my long political career," Bhuniya said.
By
Vivek Chhetri and Sandip Chowdhury
Telegraph 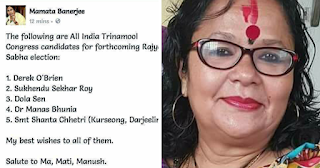