The tragedy occurred on the Siliguri-Katihar route. Since 2004 as many as 62 elephants were mowed down by speeding trains on the New Jalpaiguri-Alipurduar route that passes through forests.

A tusker was mowed down by a train in the wee hours of Wednesday at Kiran Chandra Tea Garden, Naxalbari near Siliguri in Darjeeling district. The tragedy comes just 72 hours after an elephant was electrocuted in Jhargram area in south Bengal.

A male tusker, aged about 18 years, was crossing the Siliguri-Katihar route railway line near Deomani River when a Bihar-bound train mowed it down at 4:30 am. The train dragged the animal for some distance.

This is the first incident of a train hitting an elephant on the Siliguri-Katihar route.

This route is rather an exception in north Bengal which is infamous for elephants being killed on train tracks. Since 2004 speeding trains have killed as many as 62 elephants in the New Jalpaiguri-Alipurduar route that passes through national parks and wild life sanctuaries. The accidents became more frequent when the railway line was converted from meter to broad gauge, despite opposition from wild life activists and organsiations.

“But no elephant was hit by trains in the past one and half years along the route,” said Animesh Bose the programme coordinator of Himalayan Nature and Adventure Foundation (HNAF).

“The elephant that was killed on Wednesday was trying to move into Bengdubi forest when the train hit it. Though it could not be ascertained which train hit the tusker, it is believed that the animal was mowed down by a goods train,” said T T Bhutia, the forest ranger of Bagdogra under which the incident happened.

The railways and the forest department have put in place many regulatory measures to avoid the hitting of elephants by trains in north Bengal, especially along New Jalpaiguri-Alipurduar route. They include putting in place speed limits while crossing the forest areas and designated elephant corridors. The number of night trains has also been brought down while the visibility along the tracks has been increased as per the Supreme Court’s directions.

The area where the accident happened is frequented by elephants that reach the locality during night time from Bagdogra and Bengdubi forests and return during wee hours. 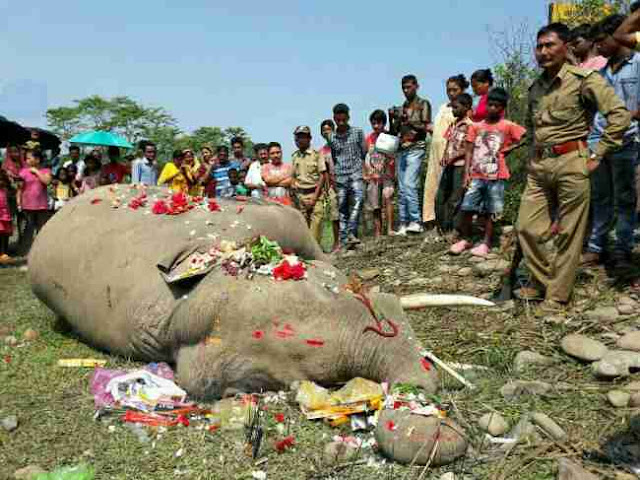