- May 26, 2017
Three Gurkha soldiers serving in the Indian Army were killed during an exchange of fire at the India-Pakistan border on May 22.
The deceased have been identified as Rabin Sharma (23) of Kushma Municipality-8 in Parbat district, Damar Bahadur Pun (40) of Korying Tun village in Gulmi and Girish Gurung (38) of Kaski district, the Rastriya Samachar Samiti reported.
They lost their life during the military operations at Naugam Sector of Line of Control in Kashmir, which demarcates the India-Pakistan border.
Sharma had joined the Indian Army five years ago. His newly wedded wife and the hometown were enmeshed in grief after learning about Sharma’s death.
Similarly, Gurung had been serving in the Indian regiment for the past 19 years. He is survived by his wife and two children.
Likewise, Pun had been serving in the Indian Army for the past 21 years. He is also survived by a wife and two kids.
In Pic: The mortal remains were cremated with full military respect today. 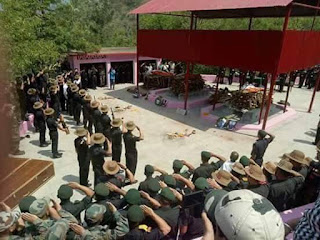