- May 23, 2017
Abhijit Sarkar scored the opening goal for India U-17 in their historic win over Italy. India U-17 football team hero Abhijit Sarkar's father Haren Sarkar is a rickshaw-puller. That is not enough to fulfil the financial requirement of the family. So his mother Aloka Sarkar works in a small grocery shop. They live in a temporarily made wooden house in a place named Bandel Church, around three hours by train from Kolkata. Abhijit Sarkar has become the apple of the eye of Indian football fraternity after a long time. He created a sensation on Friday (May 21) by scoring one of the two important goals for the Indian U-17 side against Italy. But the lifestyle of Abhijit Sarkar’s parents has not changed. Both of them had been to their respective jobs as usual on Friday. After the match 16-year old Abhijit called up his mother from Italy, informing about his achievement. Speaking about her son's achievement, an emotional Alaka Sarkar said:  “We even could not dream of our son’s achievement. We could not provide anything for him to continue football. "Whatever he needed, his local coach Ashoke Mondol used to present him. The coach was his everything.” Ashoke Mondol had given him all the football gears, starting from boots to jersey and pants. Even he had presented a travel bag to Abhijit before he travelled with the Indian team. Abhijit is a fan of Cristiano Ronaldo and Sachin Tendulkar. There are two big posters of these two legends in his one and only small room. But more interesting thing is that Abhijit has another memorable presentation. Late Carlos Alberto Pereira, the captain of 1970 World Cup winning Brazil national team had given a football to Abhijit. His mother added: “Everyday Abhijit used to sleep taking this ball with him.” The striker who is also adept in playing as an attacking midfielder has been in the U-17 national preparatory camp for last four years. He first drew attention of the national spotters while representing in the sub-junior national championship for Bengal. 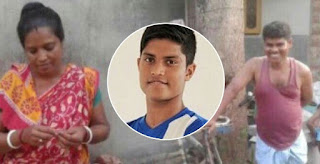