The Brave Major Leetul Gogoi, who tied Kashmir stone-pelter to jeep, gets award from Indian Army

- May 23, 2017
Gogoi shot to fame in social media after he tied a stone-pelter to a jeep in order to thwart violent protesters from targeting a security convoy.
Srinagar: Army Chief General Bipin Rawat has honoured Major Leetul Gogoi with a 'Commendation Card' for his "sustained efforts" in counter-insurgency operations in Jammu and Kashmir.
Gogoi had grabbed the headlines after he tied a supposed stone-pelter to his jeep as a human shield to thwart the violent protesters from targeting his vehicle last April.
Though the officer's action helped save the lives of his colleagues, he was criticised on social media and other platforms, which prompted the Army to start a formal Court of Inquiry into the incident.
But the Army chief's 'Commendation Card' for Major Gogoi has now been seen as an indication that he is unlikely to be implicated in the case which the Army maintains is still going on.
"Major Gogoi has been awarded Chief of Army Staff's Commendation Card for sustained efforts in counter-insurgency operations," Army spokesperson Col Aman Anand said.
Sources said Major Gogoi was given the award during Gen Rawat's visit to Jammu and Kashmir last week.
The Army Chief's 'Commendation Card' is considered a prestigious award and is given for distinguished services and devotion to duties.
A video, showing the man tied to the army vehicle during polling in the Srinagar Lok Sabha by-election on April 9, had triggered a public outcry, prompting the Army to institute a probe.
CoI was tasked to look into the circumstance that prompted Major Gogoi to tie the Kashmiri youth to the jeep's bonnet as a "human shield".
He had received strong support from BJP MP from Mysuru-Kodagu Pratap Simha for his action.
Calling for a nationwide campaign in support of Gogoi, the BJP MP tweeted, “If any kind of action is initiated against brave Maj Gogoi, let’s start a nationwide campaign to support him.” The incident drew positive reactions on social media where he received a lot of support.
Major Gogoi, 38, hails from Assam. His father is a farmer.
He reportedly joined the force at the age of 18 and served as a jawan in the 3rd Battalion of Assam Regiment. He then moved to Dehradun-based Army Cadet College (ACC) to become an officer.
Gogoi was commissioned as a lieutenant in December 2008.
The army service corps (ASC) officer volunteered to serve with the Rashtriya Rifles in Kashmir.
The ASC provides logistics support, ranging from supplies to transport, to the army. 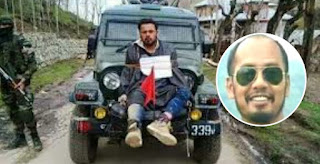