Story of a girl - I Married a Stranger

I was on the bed, feeling terrified. I opened my diary and wrote, ‘I married a stranger’ and quickly hid it under the bed. My whole body was shaking.
“What do I do?” I questioned myself.

“But what if he finds out? Do I tell him to wait for it for a few days? But what if it makes him angry?”
The front door opened and my heart jumped in my neck. I was breathing heavily. The sound of his footsteps gave me goosebumps. I looked down and pretended to be calm. I saw him stopping at the door though I wasn’t looking at him.

“Ghauri”, he said with ever-so-calm voice. I dared not to look at him.

“Ghauri, I am going to sleep in another room”, he said.

‘If your husband doesn’t want to sleep with you, you have failed as a wife’, echoed my mother’s voice in my head. But I didn’t look up. I stayed quiet.

“Don’t you want to ask me why?”, he said, with little humor in his voice, clearly trying to cheer me up. I looked at him for just a few seconds and looked down again.

“You are my wife”, he said and paused, and then he continued, “not a prostitute.”

I really didn’t know what he meant as my mind wasn’t working well. ‘When you don’t know what to say to your husband, keep your mouth shut’ came back my father’s voice. I obeyed him as usual.

“If we sleep together when we really don’t know each other, what different you would be from a prostitute? We will sleep together someday, when both of us wants it, and that day, I’d be making love to my wife. I definitely won’t be having sex with a stranger.”

He turned off the light and just few seconds later, put it on and said funnily, “I am not a secret gay by the way. I promise you that.”

Despite how scared I was, I giggled. He smiled, turned off the light and went to another room. I was still giggling. As I slept on the bed without removing my make-up or anything, tears rolled down from the corner of my eyes.

People say it amazes them when we shed tears while we are happy. They say, it didn’t make sense, but to me, it made more sense. We felt something so strong that a part of us couldn’t stay inside us, that’s what I thought anyway. To me, shedding tears while being happy meant more.

I woke up and made myself ready to make breakfast. I went to the kitchen but he was there, cooking. I don’t know how horrified I looked because it made him really scared. He quickly ran to me and said, “Ghauri, are you fine?” and his voice was filled with worries.

“Why are you cooking?” I said with a low voice.
He seemed lost. And finally he realized what I meant. “Ghauri, look at me. I like cooking, okay? You can cook when you like and so will I.”

“Ghauri”, his voice was authoritative this time, “you are not my slave. You are my wife!”

‘If you let your husband step inside the kitchen, you fail as a wife.” mocked my mother’s voice as I came out of the kitchen.

I began to open up with him, little by little. I didn’t share any of my biggest secrets with him or talked about my ex boyfriends, but I started talking with him. Once, he asked me some important suggestions about his office and my jaw dropped.
But I quickly remembered, my dad doing the same with my mom.

My mom answered and my dad got so furious, he slapped her in front of me for the first time. He looked at me and said angrily, “When your husband ask you about his works, he isn’t really asking, so keep your mouth shut.”

But they have been wrong ever since I came here. I started suggesting and he listened. I used to shed lots of tears at home and I did the same here too, but the feelings of why it came, was different.
I felt confidence building inside me. I could have never imagined asking him about going with my friends for trekking but I did.

I looked at him and said, “Can I go with my friends for trekking? It is only for two nights. I won’t do anything stupid and will come back as soon as I can. Or you could call me if you want me here and I will come back here sooner.”

My mom asked about going out with her friends fo for some religious purpose and I still remember my dad’s expression. My husband made the same.
He looked at me disgusted. He was clearly angry. I felt naked in front of him for the first time but little did I know, he was going to teach me to not be shameful when I am naked.

“Ghauri”, he said frustrated, “how many times have I told you that you are my wife? Why are you taking my permission like that? Like you are a prisoner? In fact, why are you asking at all? Inform me and go. Don’t beg for it!”, he said and walked away angrily.

My parents gave birth to me and they raised me, but I was only starting to live. My husband was teaching me how to live.

I went behind him. He was looking down the balcony. I stood behind him and looked down as well.

He laughed though I wasn’t joking. He said, “I apologize for laughing and for my earlier behavior. I will keep that in my mind, if you promise me to remember that you are not in your home anymore. Ghauri, let the past be in the past.”
He touched my back for just one second as a comfort but it was his first touch to me after I entered his house. It was, in all honesty, special. And the more he called my name, the more it sounded special.

I started calling my friends home for dinners. We sometimes drank the wine my husband brought for us. I was living. My parents’ greatest gift to me wasn’t giving birth to me, their greatest gift was marrying me off to a stranger.

One night, my husband and I were drinking. He asked me what I want to become.

I barely whispered, “I want to become a writer.”
The expression on his face was priceless, something I could never forget. I had never seen him so happier and I bet there were tears in his eyes. I would have never thought but he had always wanted to be a writer too.

“Got too busy. Will you do that for both of us?”, he asked me with smile filled with sadness and joy.
I could only manage a nod.

That night, I cried like never before. I covered my face with pillow tightly to protect the sound. I didn’t know why I was crying so hard but I wanted to scream. I saw a black shadow near my door. He was standing there, watching me.

I stood up and went to him and I kissed him. I hugged him and kissed him again. I dragged him in the bed.

“You sure it isn’t the wine doing?” he asked me.
I rolled my eyes and replied, “You sure you aren’t a secret gay?”

He laughed, “You are about to find out.” he said and pushed me on bed and kissed me while undressing me.

It was typical of me but I had to say it, I thought I owed it to him. I stopped him and said, “Before we start, I just want you to know. I am not a virgin.”
He waved his hand off and said, “I thought you were going to say that you have AIDS.”

I woke up the next day and looked at him sleeping peacefully beside me. I was sure of one thing like never before. 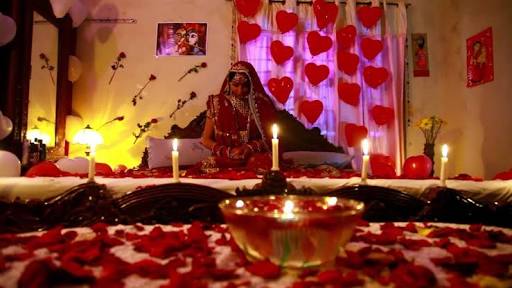