Special thanks to Mirik for reposing faith in us. We will work sincerely for you - Tweets CM

Trinamul yesterday became the first party from the plains in almost three decades to find a toehold in the hills, winning the civic body in Mirik and eating into the Gorkha Janmukti Morcha's base in Darjeeling, Kalimpong and Kurseong.

Political observers said challenging the Morcha hegemony was a major achievement for Mamata Banerjee's party as the chief minister had always laid stress on a multi-party system in the region.

The poll performance brought loud cheers to the Trinamul camp, but some still questioned if the ruling party had gained enough support to dislodge the Morcha in the crucial Gorkhaland Territorial Administration elections slated for August this year.

The observers said Trinamul could have dealt a harder blow to the Morcha had the Jan Andolan Party of Harka Bahadur Chhetri continued with the alliance it had formed for the 2016 Assembly polls.

According to Trinamul insiders, the chief minister was expecting a "return" from the people in the hills.

Over the past few months, Mamata has upgraded Kalimpong to a district and Mirik to a subdivision. She has also given hopes of land rights to Mirik residents, regularised the jobs of 300-odd teachers and created 15 development boards for different hill communities.

Since the rise of the Gorkha National Liberation Front in 1986, it was the only party that got the majority of vote shares and formed the boards in the hills till 2007, when the Morcha was formed.

Morcha won most of the subsequent polls uncontested.

About her party's performance in the hills, Mamata tweeted: "Special thanks to Mirik for reposing faith in us. We will work sincerely for you. After so many decades we begin a new era in the hills."

Although Trinamul leaders believe that a win in Mirik could prove to be a political point from where the party could spread its wing in the hills, the observers said a significant performance in Darjeeling, Kalimpong and Kurseong would have made things much easier.

Trinamul managed to win only one seat in Darjeeling and three in Kurseong. In Kalimpong, it won two seats.

Many in Trinamul asserted that the party's chances would have been better had minister Indranil Sen not commented about packing Morcha chief Bimal Gurung and party leader Roshan Giri in steel boxes and sending them out of the district. 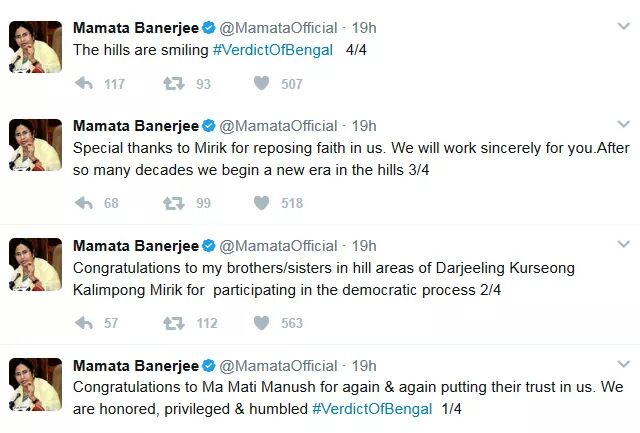