A statue of former Indian skipper Sourav Ganguly will come up at Balurghat in South Dinajpur.

Sushanta Pal, a sculptor based in Siliguri, who has never seen Ganguly face-to-face, is making the statue on the basis of the images seen on Google and Youtube at his workshop in Subhaspally.

"I was selected by the officials of Dakshin Dinajpur District Sports Association about six months ago. After a series of discussion, they gave me the assignment to build the statue," Pal, a graduate from the Bengal Fine Arts College of North 24-Parganas said.

"The statue will be made of fibre. It will be a full size structure will be eight-feet high. I have started my work and intends to finish it within a month. The DDDSA representatives will take it to Balughat and on the next month. The statue will be formally unveiled by Sourav Ganguly himself," he added.

The sculptor started working on the structure six months ago.

Pal has planned to build the statue in a posture when Ganguly raised his bat after hitting his first test century in in Brisbane, Australia, in 2013, at a test match.

The sculptor has also bought a pair of cricket pads to render a perfect look to the structure.

He however, found that the pads are not matching with the photos of Ganguly.

"I bought a pair of pads but those are not matching with his pictures of the test match because in 2003, pads were made of clothes whereas these days, the pads of synthetic materials are available. It took me 2 to 3 weeks time to finish the detailed design of pads in the statue," the sculptor said.

Pal when started his work, mailed a photo of the clay model to Ganguly.

"He was not so impressed about his looks then and wanted his hair style to be perfectly combed. But when I convinced him that his hair should have a tousled look as it is common for a cricketer after he hits a century, he agreed," Pal said.

According to Pal, it was not easy to convince the DDDSA members as there were several artists from other parts of the state.

Gautam Goswami, the general secretary of the DDDSA said: "When I informed Ganguly about the proposal, he was a bit reluctant then. Later somehow, I managed to convince him and he gave us his consent for the statue."

As of now, there is a wax statue of Ganguly at the Mother's Wax Museum at Rajarhat in Calcutta.There is no statue of the cricket icon in any part of the state.

Pic: Sushanta Pal gives finishing touches to the statue of Sourav Ganguly at his workshop in Siliguri on Wednesday. (Passang Yolmo) 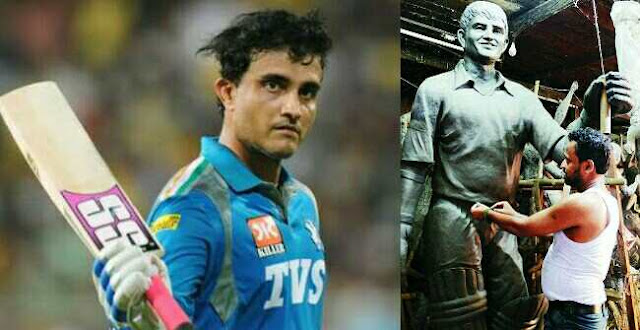