The district municipal officer has issued showcause notices to Binay Tamang, the assistant general secretary of the Gorkha Janmukti Morcha, for allegedly trying to "foment divisiveness" through "Gorkhaland versus Bengal" posters.

The contents of the two posters written in Nepali loosely translate as "to uproot Bengal's slavery and to secure our future, let us all vote for the Morcha's candidate" and "to stop the sale of mother Gorkhaland to outsiders and for a golden future of Gorkhas vote for GJM candidates."

Dasgupta has asked Tamang to reply within 24 hours of receiving the notice, explaining why action should not be taken for "appealing to caste/language/race and trying to foment divisiveness" which is in contravention of various rules.

Tamang today said: "Our posters are not against any community. To start with, we have written 'Gorkhaland versus Bengal' and both 'Gorkhaland' and 'Bengal' do not denote any communities."

The district magistrate, however, clarified that all political parties had been briefed on various provisions related to elections. "An all-party meeting had been convened by the administration in April and all the provisions had been explained to all parties," said Dasgupta.

He said as per the Supreme Court's order dated January 2, 2017 "an appeal in the name of religious, race, caste, community or language" was impermissible.

In pic: The poster published by the Morcha 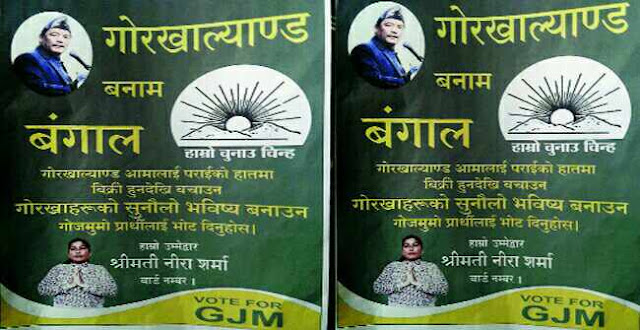