- May 23, 2017
Darjeeling was a witness to a near flashpoint between the police and a Gorkha Janmukti Yuva Morcha (GJYM-youth wing of the Gorkha Janmukti Morcha) rally when the police obstructed the protest rally in which school students were also participating. The GJYM had organised a rally from the Darjeeling Railway Station to the District Magistrate office on Monday protesting the three language policy of the Bengal government whereby schools in the state will have to compulsorily teach Bengali as a subject. When the rally reached the motor stand, it was halted by the police asking the school students to return. A heated exchange of words ensued. Later, the rally made its way to the DM office where they submitted a memorandum to the Additional District Magistrate in the absence of the DM. "We were manhandled by the police. They are trying to quash our fundamental rights. One of our college teacher Nima Sherpa was manhandled and abused. The police have to give a written apology otherwise we will come out on the streets along with our students," warned Bishal Thapa of the English Department, Sonada Degree College. "It was a peaceful and silent rally. We were not shouting slogans yet I was abused and manhandled. It is an infringement of our rights," alleged Nima Sherpa, a teacher of Ghoom Degree College. The police stated that the rally had violated a High Court directive and also did not adhere to the conditions for holding the rally. "The GJYM had applied for permission and had told us that school students would also be participating. We had told them clearly that school students cannot participate in rallies as it is against a Calcutta high court directive along with directives of the National Commission for Protection of Child Rights (NCPCR) . When they had assured us that children would not be participating we had granted permission. "However they violated the directives. School students on a school day participated in a political rally which clearly displayed GJM and GJYM flags. We tried to stop the rally when the protestors got aggressive. Cases have been initiated against the violators. We have video recordings too," stated Amit P Javalgi, Superintendent of Police, Darjeeling. The SP further stated that schools from where the students had participated will be identified and will be asked not to send students to political rallies. "In the future, if they are found violating the norms, we will lodge a complaint with the court and the NCPCR," added the SP. A Division Bench of Chief Justice Jaynarayan Patel and Justice Ashim Kumar Roy of the Calcutta high court in September 2011 had stated that students as well as children are being used as "captive audience" in the political rallies.
By
Amitava Banerjee
Millennium Post 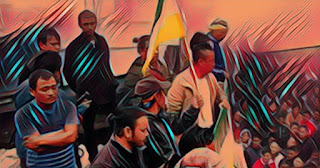