- May 20, 2017
The jawans of the Sashastra Seema Bal (SSB), apprehended a Nepal national on the Indo-Nepal border, in north-eastern Araria district, while he was carrying 1 kg of narcotics, suspected to be premium quality Double Tiger heroin of Thailand.
The powder, estimated to be worth Rs 6 crore in the international market, along with the man caught smuggling it into India from Nepal, has been handed over to the police at Jogbani in Araria district.
The man smuggling the narcotics into India has been identified as Lal Bahadur Sardar of Mayaganj, ward No 9, under Rangeli police station of Morang district (Nepal).
The arrest and seizure came about after jawans of the 56th battallion of SSB, posted at Border Outpost Amabachi, in Araria, received specific information about the movement of an illegal consignment of narcotics, at a particular place at a particular time.
A special operation was launched and a man was spotted on the porous border with two bags. He tried to flee when challenged by the SSB jawans. The jawans, however, managed to apprehend him and seized the bags he was carrying.
SSB's Deputy Commandant Maninder Kumar told HT that the value of the seized heroin was estimated to be around Rs 6 crore in international market. The suspect, Lal Bahadur, claimed this was his first consignment, but it is suspected that he may have smuggled heroin into Bihar, earlier too.
Sources said the unprecedented increase in seizure of narcotic drugs and other banned items is due to enforcement of prohibition in the state. The NCB officials said the figures may inflate as several agencies are yet to submit their data.
Excise department data shows that after prohibition rules were imposed in the state, 6,674.88 kg bhang, 1,272 kg marijuana and 73.87 acres of opium plantation were seized during various raids. 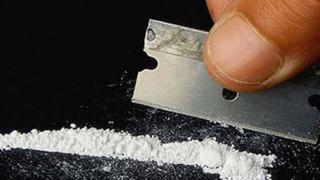