The Trinamool Congress is trying to retain Pujali, grab Raijang from the Congress and capture Domkal in its maiden vote.

Polling in seven municipal bodies in West Bengal on Sunday was a bit like the weather - chilled out in the hills of Darjeeling but very hot in the plains.

At Domkal, Raigang and Pujali, bombs flew, guns ruled and voting machines (EVMs) were snatched or smashed at many booths.

In what can be seen as the big fights, the Trinamool Congress is trying to retain Pujali, grab Raijang from the Congress and capture Domkal in its maiden vote.

The BJP is trying to come second at least. The Congress and the CPM have joined hands to take on both the BJP and the Trinamool.

Crude bombs rained down at a booth at Daspara in Ward 9 of Pujali about 40 km from central Kolkata. A motorbike-borne mob drove up, masked men marched through a bamboo grove and attacked. They had pistols and swords too, said the police. They came back on the main road, mounted their bikes and raced off. Some shouted "Jai Shri Ram".

At the booth they bombed, window panes were blown off, a fan twisted out of shape, plastic tables and chairs smashed and EVMs lying in pieces on the ground. So powerful were the bombs, a ceiling fan was bent out of shape.

Poll officials crept out of the toilets after the media arrived. "What to do," said Tanmay Sanyal, adding "There were bombs flying and masked men rushing in. We hid in the bathroom."

Home Guard Dipak Chakraborty limped back to the booth, pale and shaken. "I was outside. I ran for my life. What to do? I only had a lathi in my hand," he said.

One police official had an ancient rifle on his shoulders. He said another colleague fled while he stood and watched helplessly. How many bombs? Dozens, he said.

And who were they?

Parthi Sarathi Sadhukhan said, "Most were masked but they were led by Trinamool men who were recognised as supporters of a Trinamool leader called Khokon."

Anindita Santra, a young housewife, was furious. "They attacked us because they want to keep the BJP out. The BJP is gaining support here and Trinamool won't allow it. But how can they do this? And where was the police?" she asked.

Barely one kilometre from the spot, a large Trinamool office was packed with dozens of men and motorcycles. But the Trinamool men were in denial.

"Trinamool can't do such things. Mamata Banerjee has said she wants swachh or clean elections only and that's what we have ensured," said Ashok Dey, Budge Budge MLA.

But at Domkal and Raiganj, it was deja vu. Bombs, guns and missing EVMs were the order of the day at several booths. By 1 pm, the Congress and the BJP had recalled their candidates.

One presiding officer left a ransacked booth in tears of terror.

In Kolkata, there was opposition uproar outside the state election commission office.

Surya Kanta Mishra of the CPM said, "These elections have to be cancelled. But I doubt repolls will be any different."

Polling in four civic bodies in Darjeeling went without any incident. BJP ally Gorkha Janmukti Morcha is the incumbent there. 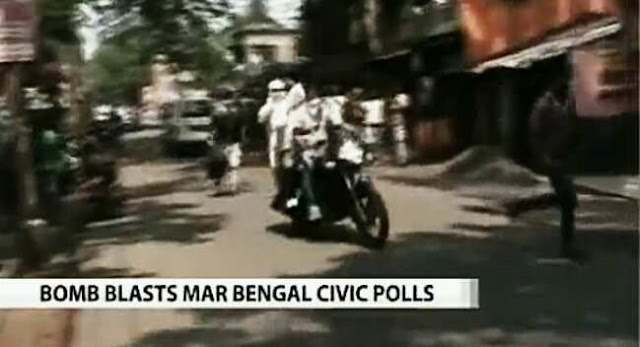