- May 25, 2017
Prime Minister Narendra Modi inaugurated the Dhola-Sadiya Bridge, the nation’s longest bridge that straddles the River Brahmaputra, on Friday.
Earlier, in a series of tweets, he described the Dhola-Sadiya Bridge as one of the most important infrastructure projects to be undertaken in India.
The bridge has been constructed across the Rivers Brahmaputra and Lohit and connects Dhola with Sadiya in upper Assam’s Tinsukia district.
Construction of the bridge began in 2011 under the aegis of the Ministry of Road Transport and Highways in public private partnership (PPP) with Navayuga Engineering Company Limited.
The bridge was scheduled to become operational from December 2015, but finish of construction works was delayed.
The project cost around 10 billion rupees and has taken about six years to complete.
It is 3.55 kilometers or 2.21 miles longer than the Bandra Worli Sea Link in Mumbai, making it the longest bridge in India above water.
The construction expert team for the bridge was led by B. Surya Raju, chief project manager, and was under the supervision of K. Jagadishwara Rao, Director, Navayuga Engineering Company Limited, Hyderabad.
The bridge is a 12.9-metre-wide or 42 feet external post tensioned one with 183 spans each of 50 meters or 160 feet) along with a two-lane connecting road from Dhola Bazaar to Islampur Tiniali.
According to reports, to cross over to Sadiya near the Lohit border in Arunachal, will take 30-minutes, reducing the travel time by four hours.
The benefits of the bridge are as follows:
• The bridge will be one of the vital links in this region which will not only give a relief to the existing transport network but also invites various developmental activities. Increased developmental activities will increase the vehicular movement.
• Any investment in this area is extremely desirable after qualifying the judgment criteria for social opportunity cost.
• Better supply chain management by keeping supply price controlled and ensuring the timely distribution.
• It will be result in facilitate marketable surplus and checking price distortion, which in turn will enhance production activities.
• It will expedite industrial investments.
• It will provide access to health and educational facilities.
• It will promote tourism in the region.
• It will increase in border trade between Arunachal and other South ASEAN Countries.
From a strategic point of view, the bridge’s importance:
• For the Brahmaputra River after Kaliabor Bridge in Central Assam throughout the 375 km of river bank there is no bridge for transportation across the Brahmaputra River. In the upstream after 120 km there is a bridge available for crossing the same but it travels through difficult hilly terrain on north bank. At present all the transport are being carried out through water only. The bridge project will enhance the entire transport system of North Assam.
• This project serves important logistics for military personnel for Indo-China border at Arunachal Pradesh. 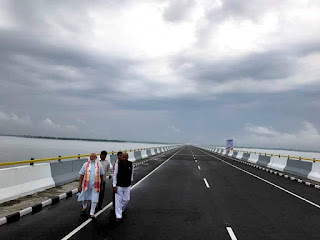