PERSPECTIVE: Morcha has to act fast and big

- May 21, 2017
TMC has already assured granting land rights to the residents of Mirik municipality (notified area). Apart from Wards 4 and 5, which include Deosay Dara and Krishnanagar, the entire land that makes up seven other wards of Mirik municipality belongs to Thurbo Tea Estate. The state government has reportedly already completed a survey to grant rights of these lands to the residents of Mirik. If this happens, TMC will gain complete upper hand in Mirik urban area. This support for TMC could easily spread to the surrounding rural areas of numerous tea gardens of Mirik where people also do not have land rights. The majority people in the hills are concerned with gash (food), bash (house, land) and kapash (clothing, basic amenities). They do not have the luxury of passing emotionally charged comments on social media like the privileged us. They will speak their mind only through EVMs.
JAP rose in Kalimpong solely on the issue of a new district. It is true that if it were not for HB Chettri to take up this issue, there would have been no Kalimpong district. People of Kalimpong have not forgotten that. JAP received a huge number of votes both in MLA and municipality elections (the latter even after dissociating itself from TMC). JAP-TMC secured more votes than the Morcha in Kalimpong municipality. People of Kalimpong are also not voting on emotions anymore. They too want fulfillment of promises and will speak their mind via EVM.
The ball is now in Morcha's court. Unless it is successful in matching TMC in granting something big to the hill people, its chanting of emotions will not work. It has stopped working already. When I say big, it really means big, not like inaugurating some school building or constructing some museum or tourist spot.
Morcha has three pending promises before the people (actually it had many, but most have already lost their validity):
* Gorkhaland state
* ST status for 11 Gorkha communities
* Central University in Darjeeling
If it doesn't fulfill these promises, it has a very difficult road ahead if it. It would be good awareness for the Morcha leadership to look at where GNLF, once the super power of the Darjeeling hills, has reached today.
By
Sailendra Dewan
TheDC 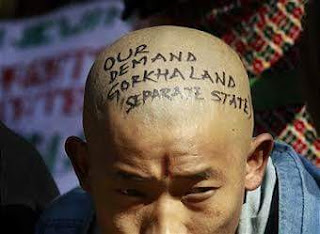