- May 22, 2017
Naxalbari is the name of a village that comes under Siliguri sub-division of West Bengal?s Darjeeling.
At a time when the historic Naxalbari movement is set to clock its 50 years in a few days, Naxal leaders hope for a resurgence of the movement especially now when their rights are being denied.
Naxalbari is the name of a village that comes under Siliguri sub-division of West Bengal?s Darjeeling. As per the census of India, the population of Naxalbari village is about 1,65,523 where most of the people depend on cultivation.
On May 24, 1967, police inspector, Sonam Wangdi was killed by an arrow shot by the farmers and on May 25, the police opened fire at a crowd, killing at least 11 people, including eight women and two children.
Later, the killing turned into a movement which is known as the ?Naxalbari movement?.
Recalling the memories of the uprising of 50 years ago, activists said the movement was the right path and history would repeat again.
According to a tea garden worker, Lalita Baraik, they are getting only Rs. 132.50 per day which is not sufficient for a family.
?We are demanding for minimum wages, according to the wage board, but still nothing has been done. Moreover, the garden authority is not providing basic needs which normally a person needs to survive,? Baraik said.
Dipu Halder said that nothing has changed in Naxalbari and all are fighting for their profit.
?After 50 years, India needs Naxalbari line for the improvement of Dalits, tribals and other deprived communities,? she said.
Goutam Ghosh, senior Communist leader, residing at Naxalbari said, ?We believe in democratic movement, not in arms struggle movement. So we need to be united.?
Paban Singha, a Naxal activist, whose mother Fulmati Devi was in the killing list said that the Naxalbari movement is taking shape again and that will save the common people of India.
The movement, which happened 50 years ago, began under the leadership of Charu Majumder, Kanu Sanyal, Jangal Santhal and Khokon Majumder and other women leaders.
Charu Majumder started the movement in a view of arms struggle to achieve their goals. But Kanu Sanyal and others disapproved the strategy or ?Line? of Charu Majumder.
Later, another movement was led by the group.
After five decades, the soil of Naxalbari has again hit the headlines with Bharatiya Janata Party (BJP) president Amit Shah visiting this place and having lunch with a tribal family - at Gita Mahali and Raju Mahali?s house.
A few days after his visit, Mahali family joined the ruling party in the state - the Trinamool Congress (TMC).
Agencies 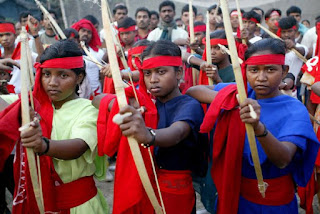