- May 31, 2017
The Sashastra Seema Bal (SSB), in a joint operation with the customs, seized a huge consignment of opium worth nearly two crore in Siliguri.
Commandant, SSB 41 Battalion, Ranidanga, Rajiv Rana told that the joint operation was launched on specific inputs, where a significant amount of narcotics were to exchange between the two parties.
"The seizure was done yesterday. We got information that some people from Nepal will come to India and there will be some kind of dealing of drugs. After waiting for very long, we saw suspicious element walking with a bag. When we asked that person to stop, he immediately started running. And when he realized that the bag was heavy he left the bag behind and entered one of the houses. It was midnight so we could not search the houses as it was not correct legally. We have 15 kgs of suspected Opium which values 1.9 crore in the international market," he said.
Earlier this month, a huge consignment of opium was seized from Bagdogra - Shivmandir Road during a joint operation.
A person was arrested, along with a two-wheeler, during the operation. (ANI) 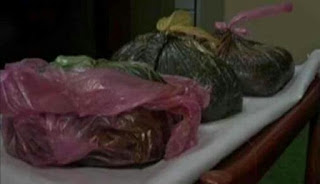