One arrested for killing Siliguri Businessman

A trader died and a second one suffered serious injuries when they were hacked by a group of men at a busy commercial hub of Siliguri yesterday morning in what appeared to be the fallout a rivalry between two groups over running shops on encroached railway land here.

Gopal Ghosh, 40, succumbed to his injuries at North Bengal Medical College and Hospital, while his friend, Md. Mukhtar, is under treatment at a private nursing home here.

Senior police officers, including C.S. Lepcha, the commissioner of Siliguri metropolitan police, have visited the spot. Police have started an investigation and arrested one person in connection.

"Around 11am, five or six men attacked the duo with sharp weapons at Mahabirstan. The trader suffered serious injuries and later died at North Bengal Medical College and Hospital. We started a probe and arrested one person. Searches are on to arrest the other attackers. The motive behind the attack is yet to be ascertained. The attack might be the fallout of a rivalry," Gaurav Lal, the deputy commissioner of police (zone I), said.

"We have information that he used to head one of the lobbies which set up shops at the local market. Most of the shops are on encroached railway land next to Siliguri Town station and given the location, there is a huge demand for space among small traders. There is another group which also works in the same locality. Both these groups had differences over certain issues, including sharing of money that they would take from the traders who run shops or intend to set up new shops," a police source said.

The demand for space on the railway plot is high because of escalating rates for commercial areas at prominent locations here.

"Traders know well that they are being provided with space on encroached railway land. Even then, they pay money to syndicates as it is difficult to buy space at in a prominent commercial area in Siliguri. These days, the minimum rate is between Rs 15,000 and Rs 20,000 per square ft to set up shops legally and the amount can go up to Rs 40,000, depending on the location. On the other hand, the syndicates give the traders a space of 80sqft or 100sqft against Rs 4 lakh-Rs 5 lakh," a businessman at Mahabirstan said.

The attack of such kind in broad daylight in Siliguri is for the first time in recent years. After the murder, shopkeepers downed shutters and Mahabirstan turned deserted.

The spot is hardly a kilometre from Siliguri police station.

"The incident has come as a shocker for traders. We have not witnessed such attacks on businessmen in Siliguri. We met the commissioner of police and requested her to immediately arrest the culprits. We have also urged her to increase patrolling in the area so that such criminal activities can be prevented," Sanjay Tibrewal, the general secretary of the North Bengal Merchants' Association, said.

Telegraph
Pic: A policeman and local people at the spot where the traders were hacked in Siliguri on Monday. Picture by Passang Yolmo 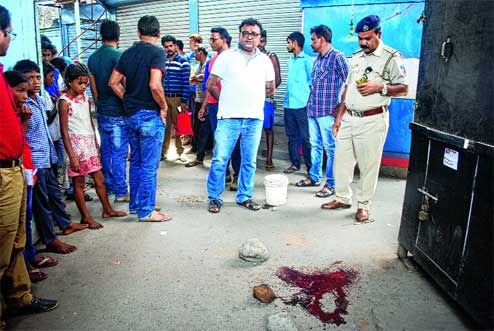