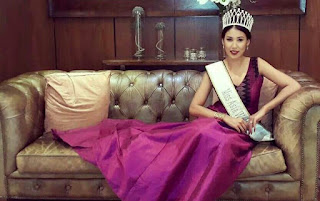 Shrestha who had won the subtitle of Miss Personality at Miss Nepal pageant in 2013; had also been selected to represent Nepal at Miss Multinational in Philippines last year. The 25-year-old even owns a a pageant titled Miss Intercontinental Universe and serves as the CEO. The organizers of Miss Asia World were so impressed by her and her pageantry experiences; they withdrew her entry from this year’s competition and announced her the winner of the pageant’s 2016 edition instead.
This year’s edition was supposed to be Miss Asia World’s first edition; but after Shrestha was officially announced the title winner of the pageant’s 2016 edition; this one became the second edition. She crowned her successor, Miss Syria Angy Morad, at the finale on Saturday.
“I was officially crowned Miss Asia World 2016 as the organization felt that I deserved to be one of the jury members for this year’s edition instead of being a participant”, Shrestha told NeoStuffs from Lebanon. “It’s probably the first time that a Nepali contestant has been announced the direct winner in an international pageant. I feel proud that I was able to represent Nepal in a good way; and will be returning home with a crown”, she further said. She is scheduled to return to Nepal on Monday.
The 25-year-old Hospitality Management student stands 5 ft 7 inches. She is the president of Leo Club of Kathmandu Sangam and the brand ambassador of Peace Wave Nepal, an NGO.