Four municipalities in Darjeeling and Kalimpong districts voted peacefully yesterday, prompting Bimal Gurung to take a dig at Mamata Banerjee by contrasting the polling day images from the hills with those from the plains.

The Trinamul Congress leaders from the hills, too, admitted that free fair and "real elections" were conducted in Darjeeling, Kalimpong, Kurseong and Mirik.

Gurung, the Gorkha Janmukti Morcha president, yesterday said: "Look at the images coming from the plains and the one you see in the hills. It is clear that democracy is at peril in the plains where Trinamul is in power. We have always believed in democracy and the way the polls were conducted is an example that real democracy exits in the hills but the same cannot be said in places where they are in power."

Widespread violence was reported from Raiganj in North Dinajpur, Domkal in Murshidabad and Pujali in South 24-Parganas during today's civic polls.

Till late in the evening, no major problems were reported anywhere from the hills.

Ranjita Thami, 30, was arrested for allegedly trying to cast a false vote in Darjeeling.

Amit P. Javalgi, the superintendent of police, Darjeeling, said: "Ranjita Thami from Ging tea estate was arrested before she could cast a vote after polling agents of Trinamul and independent candidates had spotted her. She had come to cast false vote in the name of Aneesha Pradhan of ward 10 in Darjeeling."

Even the Trinamul leaders said they had no major complaints in the hills. N.B. Khawash, the working president of Trinamul (hills), said: "The elections have been free and fair. After many years, real elections were held in the hills. Earlier, it was always one-sided or candidates won through selections and not elections."

In 2011, the Morcha had won all civic seats in Darjeeling, Kalimpong and Kurseong uncontested. Elections were held only in five of the nine wards in Mirik, which, too, had been won by the Morcha.

Khawash added: "We can say complete democracy has prevailed in the hills and this is because of the state government's grip on law and order. This is Trinamul's first victory. We are also confident that people want change."

Trinamul is confident of forming the board in Mirik.

Gurung said the Morcha was confident of victory in the hills, even though he obliquely admitted that some Independents would win in some wards.

In Kalimpong, Harka Bahadur Chhetri said he was confident that the Jana Andolan Party would form the board there. 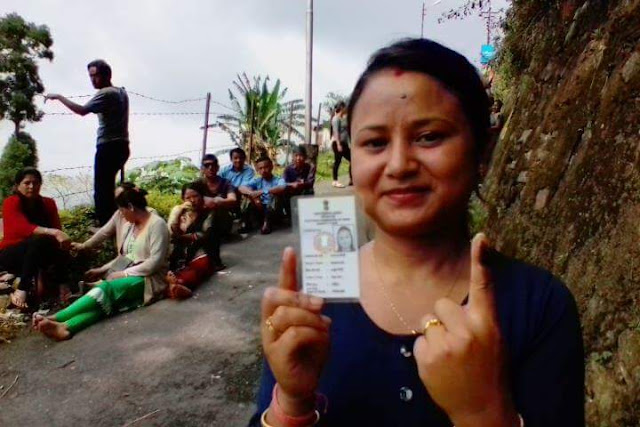