Darjeeling hills is seething with anger after Indranil Sen, a minister who is close to chief minister Mamata Banerjee, said on Friday that senior Gorkha Janmukti Morcha (GJM) leaders, including Bimal Gurung and Roshan Giri should be packed in six-foot-long steel boxes and dispatched out of Darjeeling hills after the May 14 civic polls.

Sen was speaking at an election rally in the hill town of Darjeeling on Friday.

Posters by apolitical associations have come up in the hills to protest against the minister’s statement. A video clip of Sen’s speech has gone viral in social media with thousands protesting the statement.

On Saturday, thousands of people in Darjeeling responded to a call given by Gorkha Janmukti Morcha (GJM) and participated in a rally to protest against the minister’s speech. GJM that has interpreted Sen’s statement as an attack on locals by an outsider, organised the protest at the same spot where Sen delivered his speech on Friday.

In his address, Sen said, “I have brought 32 steel trunks of 6 feet length and ropes. Now it is your job, brothers and sisters. The elections are slated for May 14 and cast your votes for TMC and GNLF and pack Bimal Gurung, Roshan Giri and all their candidates and send them to another district. At that time you will hear them singing Kabhi Alvida Na Kahana (never say goodbye) from inside the trunks.”

Sen, who was a singer before he turned to politics also sang two lines of the popular Hindi song and asked TMC supporters to sing along with him.

The development should not amuse the chief minister, who is only too aware that identity is a sensitive issue with the people of the hills.

GJM which has kept up the demand of a separate state of Gorkhaland for the civic polls has projected the elections as a Gorkhaland versus Bengal fight. Trinamool Congress, on the other hand, is banking on developments carried out by the state government, creation of separate Kalimpong district and the 15 different development boards the state government has formed for different hill communities.

Such has been the anger over the minister’s statement, that even Gorkha National Liberation Front, which is an ally of Trinamool Congress condemned Sen’s remark.

“We condemn the statement which was uncalled for at this moment,” said Mahendra Chhetri, general secretary, GNLF.

Observers believe that Sen’s comment has the potential of damaging Trinamul’s fortunes in the hills, despite the party making some inroads in the hills. Bengal’s ruling party is making all efforts to register its first electoral victory in the politically volatile hills.

In the police complaint filed by Roshan Giri, it was alleged that Sen was spreading hatred and issuing veiled threat to the GJM leaders. “The public speech of Sen was incendiary, full of hatred and the one that is bound to incite tension within Gorkha community. The statement has also violated the section 153B (b) of Indian penal Code and model code of conduct.” 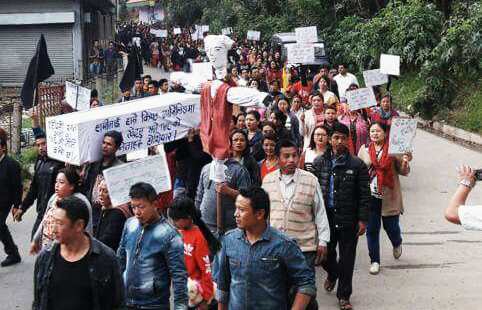