- May 25, 2017
West Bengal CM and TMC supremo Mamata Banerjee met PM Narendra Modi today in Delhi.
Later speaking to the reporters, Bengal CM said that they discussed about various development projects currently being done in the state. Contrary to speculation, there was no discussion about Presidential Poll said Mamata.
Commenting on possible choice for President, TMC supremo said that.
During her stay in the capital, Mamata is also likely to meet Congress president Sonia Gandhi. Her meeting with Modi comes in the backdrop of Mamata, known for taking a strong position against the BJP, intensifying efforts for a joint candidate for the presidential race.
Before leaving for the national capital, she told reporters in Kolkata on Wednesday, “… I will discuss the Ganga erosion problem and will ask for funds to deal with the problem of river erosion.”
Mamata has been seeking loan waiver for her state for long. Opposition parties are slated to meet on May 26 here to decide on a candidate. President Pranab Mukherjee’s term ends on July 24 and the election has to take place before that. 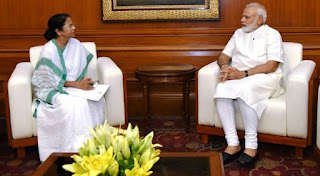