- May 25, 2017
Arson, bombing and violent clashes between police and the opposition BJP marked the day in Kolkata as the saffron party took out a march to city police headquarters Lalbazar on Thursday to protest several issues, including demanding an immediate arrest of sacked controversial Imam of Kolkata's Tipu Sultan Mosque- Maulana Barkati.
Police used teargas shells, water canons besides batons to disperse the mobs. Bombs also went off in the march. BJP MP Roopa Ganguly said her party workers were marching towards city Police headquarter  to submit a deputation peacefully when they were attacked. BJP central leader and national secretary Kailash Vijayvargiya was also in the march.
At least three massive rallies, led by several BJP leaders, started from College Square and Esplanade area in Kolkata and Howrah station area in its twin city Howrah in the afternoon. Setting up barricades, police stopped the rallies at Phears Lane, Bentinck Street-Ganesh Chandra Avenue crossing and Tea Board areas respectively.
BJP supporters engaged in a scuffle with the police force at Bentinck Street and police restored to  lathicharge to disperse protesters.
BJP national secretary Rahul Sinha and party's Rajya Sabha MP Roopa Ganguly fell sick due to the skirmish with police and later they were arrested.
Clashes broke out in College Square and Tea Board areas too. Each area turned into a battlezone with police resorting to lathis and mobs throwing stones.
Meanwhile, few journalists were beaten up by police today again, even after wearing safety jackets, provided by the city police.
Police alleged that BJP agitators threw crude bombs aiming at police force.
Due to the rally, traffic in central and north parts of the city was partly disrupted for hours.
BJP leaders claimed that over 50 of their supporters were injured in the clash while over 50 agitators, including party's top leaders, have been detained by the police here.
(Reporting by Deepayan Sinha, Images by Avishek Mitra) IBNS 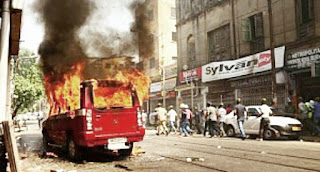