- May 21, 2017
"Kashmir is ours, Kashmiris are ours and Kashmiriyat is also ours," Union Home Minister Rajnath Singh said today, asserting that the Modi government will find a "permanent solution" to the Kashmir problem. 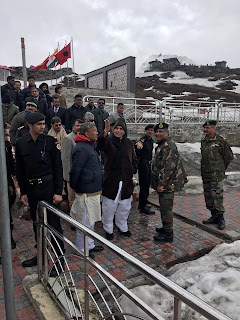 The home ministers assertion came amid continued unrest in the Kashmir valley.
Addressing a public reception here in this tiny northeastern state, Singh accused Pakistan of trying to "destabilise" India by fomenting trouble in Kashmir.
"But I want to tell all of you that our government will find a permanent solution to the Kashmir issue," he said, without elaborating.
Kashmir is in a vice-like grip of violence since the killing of militant commander Burhan Wani in an encounter with security forces in July last year. Though there was a brief lull, violence erupted again on April 9 this year when the bypoll to Srinagar Lok Sabha seat was held. Normalcy has eluded the state since.
Eight people were killed in firing by security forces on the polling day and a paltry 7.14 per cent of the electors came out to vote, the lowest ever in the valley since the rise of militancy in 1989.
Bypoll for the Anantnag Lok Sabha seat was first deferred and then cancelled by the Election Commission which said the situation in the region was "scary".
Students have joined the protests like never before with even girls taking to streets, and fighting pitched battles with security forces.
Around 80 people had lost their lives as violence held the valley in a prolonged stranglehold in the aftermath of the killing of Burhan Wani, who had emerged as the posterboy of militancy in Kashmir.
Rajnath Singh said heads of government of all neighbouring countries, including Pakistan, were invited to the swearing-in ceremony of the Modi government in 2014 in an indication that India wanted friendly relations with them.
However, he deplored, there was no change in the "attitude" of Pakistan which wanted to "destabilise" India.
"We hope that Pakistan will change. If it does not change, we will have to change them. After globalisation, one country cant destabilise another country as the international community will not forget it," he said.
The home minister is on a three-day visit to Sikkim during which he attended a conference of Himalayan states to review the security situation and development activities along the Sino-Indian border.
He also visited the Nathu La border post, besides a few posts of the Indo-Tibetan Border Police and SSB along the Sino-India and Indo-Nepal border respectively. PTI
National