- May 23, 2017
The youth wing of Jan Andolan Party (JAP) has gone on a dharna for indefinite period at Triangular Park in Thana Dara at Kalimpong seeking justice in the Akhil Bharatiya Gorkha League (ABGL) president Madan Tamang murder case.
Tamang was hacked to death on May 21, 2010 in broad daylight allegedly by assailants from Gorkha Janmikti Morcha (GJM) at the Club Side in the heart of Darjeeling.
Commemorating the 7th death anniversary of Tamang who was a prominent Gorkha leader, members of the JAP youth wing today said that the Gorkhaland agitation which was revived in 2007 was led by the slain ABGL leader.
“The GJM leaders had been conspiring for an interim settlement-the Gorkhaland Territorial Administration (GTA)-midway of the separate statehood agitation and Tamang had then vociferously stood against the said conspiracy.
The way the ABGL leader was removed forever through such heinous act of murder and the analysis of the reasons behind his murder thereafter clearly proved how the agitation for a separate statehood for which the entire hills stood in unison got sadly hijacked midway,” said Amir Basnet, Secretary, JAP Youth wing.
The party further alleged the GJM of failing across all fronts as far as carrying out development works in the hills through the GTA is concerned.
“The GJM uses Gorkhaland as its poll plank in every election. Gorkhaland shouldn’t only be an agenda to fight or win elections, or be abused to protect their party or their chair,” said Basnet adding that a separate state is what people ultimately want.
People voted for Morcha in this municipal election only for their sentiment attached with Gorkhaland, as the Morcha once again used it as its poll plank, Basnet stated.
“The JAP youths will only withdraw their dharna once the morcha practices what they have been preaching so far. The GJM leaders have always assured people over their aspirations for a separate Gorkhaland state. Now they (GJM) should end their relationship with the Bengal government and dissolve the GTA. If the GJM severs all its ties with Bengal and pressurize its MP for Gorkhaland, the dream of late Madan Tamang who died for the very cause will come true,” opined the JAP youths.
21 JAP youths had decided to sit for the dharna till the time of filing this news.
By
Nisha Chettri
Himalayan Mirror 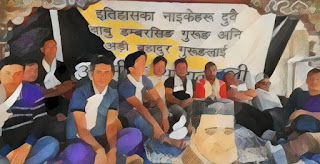