- May 25, 2017
A senior official of the Airports Authority of India today said he hoped the Balurghat airport would be ready for flight services in four months if works related to passenger amenities and security were completed fast.
The airport at Mahinagar, on the outskirts of Balurghat, that has been defunct since 1987 was leased out to the state government for 30 years by the AAI in June 2016. For this, a memorandum of understanding was signed by the state transport department and the AAI.
As per the MoU, the Malda airport was also handed over to the state government.
Both the airports have been defunct since 1987. After Mamata Banerjee came to power, she had time and again insisted that the two airports be made operational. AAI officials, however, said there were certain constraints, including feasibility of flight services, to make the aerodromes operational again.
This made the state propose to the Centre that it be given the airports for renovation. After the land was handed over, the state public works department took the task of extending the length of the runway at Balurghat.
Today, a team of officials from the AAI, the director general of civil aviation (DGCA) and the state transport department visited the airport spread over 132.66 acres.
Sujit Kumar Dasgupta, the joint general manager (operations) of the AAI posted in Calcutta, who was in the team, said: "Today, we visited the airport and found that some of the works related to passengers' amenities and security were yet to be completed. We hope those would be done shortly and then, the state would be provided with necessary license and permission on the basis of an application. If every thing progresses in a normal manner, we hope the airport would be ready for flight operations in another four months."
The team arrived at the airport by a chopper. They took stock of the infrastructure and then went to the circuit house where a meeting was held in the presence of officials of the district administration. Senior police officers were also present at the meeting.
"Earlier, the runway was 2km long. But now, it is around 3km long. The extension and repair of the runway had finished about a month back," said an official of South Dinajpur district administration.
The state government intends to operate smaller aircraft, like the 12-seater or 22-seater planes, from the Balurghat airport.
At the meeting, those representing the AAI and the DGCA have suggested certain works at the airport, sources said.
They include improvement of sewerage system, increase in the height of the boundary wall and construction of a 3m wide road parallel to the runway. "We have assured them that such works will be carried out in a couple of months," an official said.
Sources in the AAI said after the infrastructure was ready, the state would have to apply for a licenses and necessary permissions to the DGCA.
"Once the state gets the clearances, it can approach airline companies to start flight services from Balurghat," a source said.
Sources in the state government said once the Balurghat airport was ready, the state would try to include the airport in the regional connectivity scheme (Udan) floated by the Centre. So far, the state has got five new routes announced under the scheme, which include the Calcutta-Cooch Behar sector.
By
KOUSIK SEN
ADDITIONAL REPORTING BY AVIJIT SINHA IN SILIGURI
Telegraph
In Pic: The team at Balurghat airport on Wednesday 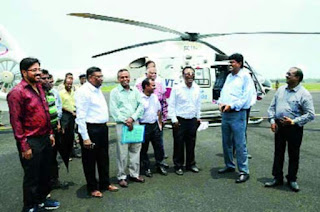