The Opposition in Bengal yesterday accused the state election commission of allowing "legalised plunder of democracy" in three of the seven municipalities that voted and filed a police complaint against the poll panel chief.

The Opposition has demanded the removal of the state poll panel chief, A.K. Singh, and fresh elections in Raigunj, Domkal and Pujali where allegations of rigging and other malpractices were levelled at the Trinamul Congress.

In sharp contrast, polling for the four hill civic bodies - Darjeeling, Kalimpong, Kurseong and Mirik - was peaceful, something that Darjeeling leader Bimal Gurung tom-tommed to suggest that chief minister Mamata Banerjee was unable to check violence in the plains.

The Left, the Congress and the BJP sent separate emails to Singh, referring to "large-scale poll process vitiation" in the three plains civic bodies after the poll official allegedly refused to meet any political party delegations today.

"We wanted to meet Singh and brief him about the manner in which the administration sided with the Trinamul goons, who were out to intimidate voters and loot their votes. But the poll panel chief refused to meet us. We had no option but to lodge a complaint against him with the police," said leader of the Opposition and Congress member Abdul Mannan.

This is the first time in recent memory that a police complaint has been lodged against a poll panel chief.

Singh, a retired Bengal-cadre IAS officer, has tenure at the poll panel till May 2019. He was made the poll panel chief replacing interim poll panel boss Alapan Bandyopadhyay in October 2015.

Defending his stand, Singh said: "I was busy overseeing the election process, which is why I didn't give the time to meet political party representatives."

But Bengal BJP president Dilip Ghosh said: "There were fears that the polls would be rigged, and we told the poll panel chief several times that we wanted central forces. But he ignored our suggestions. We want re-polling in all these three civic bodies under the central forces' supervision."

He added: "In the four civic bodies in the hills - Darjeeling, Kurseong, Kalimpong and Mirik - the panel deployed central forces as the ruling party wanted it. But in the plains, state police were deployed and votes were looted as the state administration played a partisan role."

However, Trinamul leader and state education minister Partha Chatterjee said: "Overall, the elections were peaceful. I followed the polling through the day on various TV channels and found no disturbances anywhere."

In their letters to the poll panel, the Opposition parties have listed several instances of vitiation. They have also expressed fears about the way in which next year's panchayat polls might be conducted.

"What we saw today was a trailer. If the same poll panel chief stays on, we cannot expect free and fair polling at next year's panchayat elections," Mannan said.

BJP sources said they were readying papers to move Calcutta High Court and seek empowerment of the state election commission as in Maharashtra, where the state panel, like the Election Commission of India, enjoys independent powers to transfer bureaucrats and police officers.

Ahead of the 2013 rural elections, the then state election commissioner, Mira Pande, had approached the high court and finally the Supreme Court to get central forces deployed during the polling.

The question whether the state government or the state poll panel has primacy over the election process during civic and rural polls is yet to be settled in the Supreme Court. 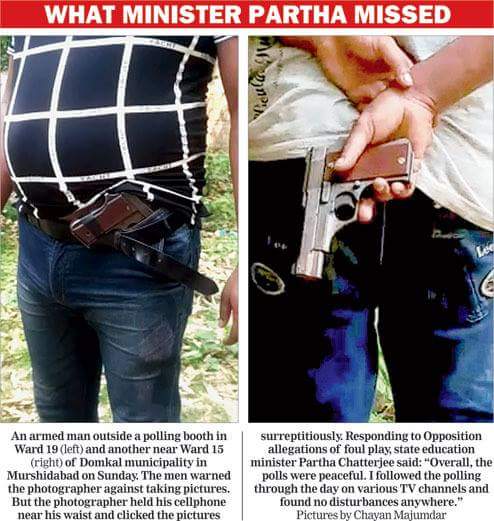