- May 21, 2017
Thousands of jobseekers from Bihar vandalized several trains and damaged railway properties, during a protest demanding special trains to return home, at New Jalpaiguri (NJP) and Malda Town railway stations in West Bengal on Sunday, reports said.
According to reports, after completing the written test for Bengal government's Group-D job on Saturday, a large number of candidates were returning Bihar on Sunday morning and as they did not have reservation, Railway Protection Force (RPF) personnel prevented them from entering reserved compartments of Bihar-bound trains.
Protesting the matter and demanding immediate arrangement of special trains to Bihar, they went on berserk at New Jalpaiguri (NJP) and Malda Town stations.
Jobseekers reportedly ransacked station premises, platforms and signaling systems at both stations and vandalized few express trains and engines, which were standing at those stations that time.
Due to the hour-long rampage, train service in those lines were disrupted and several important express trains were stopped at several nearby stations for hours.
Later RPF, GRP and local police along with Rapid Action Force (RAF) rushed to the stations and security forces restored to lathicharge to disperse agitators and bring the situation under control.
Few policemen and passengers were injured during the clash, according to reports.
Hours later, Northeast Frontier Railway run two special trains to Barauni station in Bihar.
A senior railway official told IBNS that railway have lodged two FIRs at local police stations in Malda and New Jalpaiguri as properties worth several crores were damaged due to the rampage.
Deepayan Sinha, IBNS 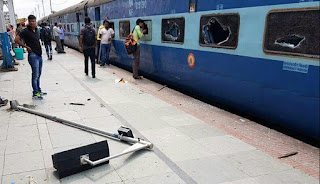