- May 23, 2017
Bimal Gurung today hinted at the launch of a prolonged Gorkhaland movement this year, saying "even a mother will not know that a child is hungry if the child does not cry".
Although the Gorkha Janmukti Morcha president said the agitation would be democratic, it is bound to cripple normal life and hit the tourism industry which was bouncing back after years of strife in the Darjeeling hills.
The hills have been relatively calm since 2013 when the Morcha organised a staggered 44-day strike to pursue the statehood demand. The Mamata Banerjee government cracked down on the protest by arresting senior Morcha leaders and elected GTA Sabha members.
Just before the start of the 2013 agitation, Gurung had resigned as the chief executive of the GTA, only to re-occupy the chair later that year.
Addressing Morcha supporters at Gorkha Rangamanch Bhavan in Darjeeling today to celebrate the party's victory in the recent civic polls, Gurung said: "We have to get justice from the Centre by 2019 (when the present NDA government's term ends). Even a mother will not know that a child is hungry if the child does not cry. We have to go for an andolan; we must be ready; the leaders must also be ready; they should not run away (like in 2013). They have to be ready to be in jail."
The Morcha chief, however, stressed that the party's agitation would be democratic but warned his supporters that the Bengal government "could use all administrative measures" to crack down the movement.
"I will assure you that our agitation will be democratic but the same cannot be said of the Bengal government which could use all administrative measures," he said.
General strikes are something that cannot be ruled out if Gurung finally decides to re-launch the Gorkhaland agitation and chief minister Mamata Banerjee, observers believe, is not likely to sit quiet, especially after Trinamul has made inroads into the hills through recent civic elections. Mamata's focus on the hill politics has been amplified by the nomination of hill Trinamul leader Shanta Chhetri as the party's candidate for a Rajya Sabha seat.
The recent civic elections indicated that the Morcha was returning to its basic cause of the statehood as it had called the electoral fight "Gorkhaland versus Bengal".
The GTA's tenure comes to an end in the first week of August this year. There are indications that the state government will soon conduct panchayat elections, which have not been held in the hills since 2000.
Gurung today said: "The GTA elections may or may not take place."
He did not explain the context of the remark but seemed to be suggesting that the elections might not take place because of the agitation.
The tourism sector, which is sensitive even to mere threats of agitation, is staring at a tumult.
"Tourist inflow has been good this season. It was good in the last three years also. However, if an agitation starts, its doomsday for the tourism industry which directly or indirectly supports a lot of hill people. Peace is most important for the industry to survive," said a hotelier who did not want to be named.
Annually, about 3.5 lakh domestic tourists visit Darjeeling, while international arrival is estimated to be around 40,000.
The Gorkha Janmukti Yuva Morcha is slated to hold continuous rallies in Darjeeling from tomorrow to protest against the government's reported move to make Bengali compulsory at schools.
By
Vivek Chhetri
Telegraph 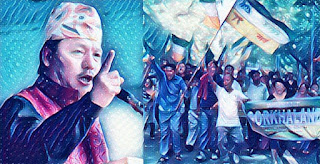